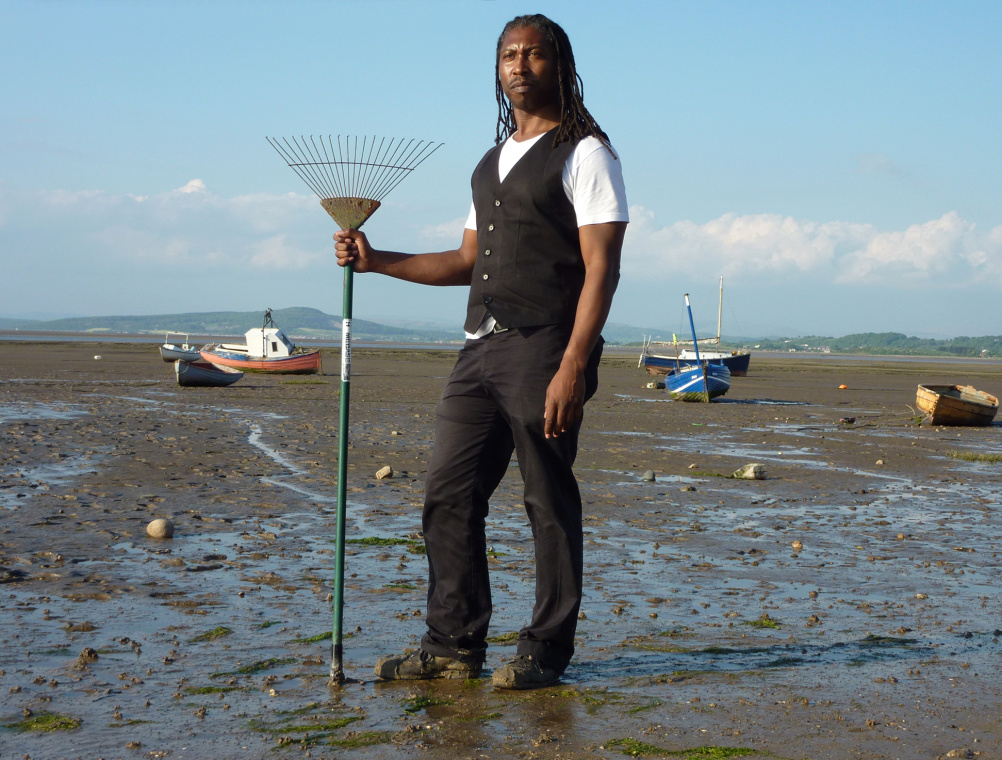 I am a British artist, with parentage from Jamaica. My works is a conscious ‘mash-up’ of drawing and sculpture, combined with digital film and live installations. The work explores the intricate connections between the body and our experience of the modern environment, and this is communicated through bold interactive art, also using urban and rural landscapes as my canvas. I studied graphic design at Middlesex University, received a first class degree, and continued on to train as an artist in mixed media painting at Central St Martin’s College of Art, where I did my foundation. I also trained in film and video production at Four Corners London. As an award-winning creative director, with a professional background in commercial graphic design, I founded consultancy Creative Hands, which was responsible for creating some of most iconic and memorable music brands and imagery of the late eighties. The company ran for 17 years and was sold in 2004. Over the last nine years, art has become my focus, with the creation of Evewright Studio. I have participated in several group and solo exhibitions with my Walking Drawings project. In 2012 one of my ‘Walking Drawings’ installation prints was exhibited at the Royal Academy of Art.

How did you get started?

I started as a junior designer at a company called Design Solutions based in Soho in 1988. The best thing I learnt there was how to be logical with my thought processes when solving design problems. I had creative energy in abundance back then and being in such an environment helped me focus and taught me a lot about the process of how design and creativity was bought and sold. The industry was still very young and graphic design was beginning to be taken seriously by all type of businesses. You could say there was the beginning of bit of a design boom.

What challenges did you face in getting into the industry?

There were not many black designers, let alone companies owned by black designers, when I started out. The industry is still very light in that regard today. So when I set up Creative Hands, it was quite a challenge getting started and growing the company. Overcoming some clients’ perceptions was another barrier we had to deal with. When clients saw the quality of work we produced they would call us in but when I arrived in the offices we had to first overcome the negative stereotype as black men. On more than one occasion a receptionist would mistake me for the courier picking up and delivering a package. I always maintain a high creative output and would always go the extra mile for my clients. The saying that you are as good as your last job ran true for us. We were based in the now-famous Hoxton Square area, but when we were there, only designers like Malcolm Garrett or Neville Brody were our neighbours. Hoxton was a place where not many people wanted to be but it suited me because it had an edge, which is still there today. I believe the Hoxton Hotel is where one of our old offices used to be. The challenge was to develop an impressive and diverse client roster, from music and arts to corporate. I was happy to say that I was able achieve that and eventually sold the company, successfully exiting, which for any business, especially design, wasn’t an easy thing to achieve.

Who are your greatest inspirations?

Not quite everything, but there’s a lot! Muhammad Ali and George Foreman’a ‘Rumble in the Jungle’, Jean-Michel Basquiat, Chris Ofili’s ‘Dung paintings’,  Melvin Van Peebles’ Blaxploitation movies, the Lucian Freud painting of the Queen, Neville Brody’s ‘The Face’ magazine design, Bob Marley’s ‘No woman no cry’, Francis Bacon’s screaming paintings, Damian Hirst’s Shark in a Tank, British landscapes –  especially the Scottish Highlands, Studio One Reggae, Peter Saville’s New Order Record sleeves, Usain Bolt’s 9.58sec 100 metre world record, Steve McQueen’s film Hunger, Turner nominee Lynette Yiadom-Boakye, invisible Black People, my son and granddaughter. My influences are wide ranging I could go on and on. Art, art history, photography, film, sculpture, performance, typography, paintings, all types of music and sound. Drawings have been the foundation my creative practice and I am rarely seen without a sketchbook. Having a good foundation at St Martin’s really helped formulate the way I look at the world. When I started my degree one of my tutors gave me a book on Milton Glaser.  I just loved the way he was able to work between art and graphics, which gave me a much-needed doorway into how I approached graphic design. When I started to work professionally I have always incorporated the same ideologies, which mean you use whatever appropriate medium to solve a client solution. So even now my art studio works on a wide range of projects. I incorporate everything from film with sculpture and digital installation using coding, to creating public interaction projects with drawing and performance, to traditional design and print. It’s just creative expression to me, the medium I use is irrelevant.

I find my current Walking Drawing films and project very special. I never try to look back at my designs; however seeing the Jamiroquai campaigns I produced still gives me a buzz. We designed the band’s first two albums in the ’90s and the branding became quiet iconic, it got our name out there. I recently moved house and found all the original artworks produced by hand with the mark up instruction attached, complete with a series of huge flyposters. The ‘Spliff Man’ poster for ‘Space Cowboy’ is still my favourite, even though I don’t smoke. That whole project got us noticed. It is much harder now for young designers with the scaling down of the music industry and marketing budgets. There are fewer places out there where talented young creative can get their work seen.

What would be your dream job?

I’m lucky. I’m currently doing my dream job playing with sand and film cameras. Making art is the most interesting and engaging thing for me at the moment. I have always been a person who has enjoy the exploration of ideas and with the merging together of media in all forms it’s the most exciting time to be a creative – and especially an artist. Clients are also more open minded as to new ways to reach audiences with the exponential growth of new media. With Evewright Studio I am building a dynamic art practice and I am now working on a new series of Walking Drawings from Africa across the diaspora. It’s a challenge but I suppose that’s my dream project at the moment and I always go for that dream.

Go for anything with technology, especially mobile – ‘there’s gold in them there hills’. Do what you set out to do. Then go do something else. Keep moving and keep innovating and don’t be afraid to be being creative. Clients expect designers to be a little crazy, that’s what they pay you for.

I am a full-time visual artist working in a variety of media from sculpture to film and have been developing a series of installations call Walking Drawings, which I hope to exhibit next year. A Walking Drawing is a large-scale drawing undertaken by Evewright with a combination of freehand and mechanical tools on a vast landscape (canvas) of at least a quarter of a mile in the early hours of the morning. The drawing then becomes pathways and people of different ages, genders and cultures all dressed in black or colours are led on to it and invited to walk its lines in various formats and patterns. The public are invited to walk these lines to engage with, and experience a drawing in a new way to become participants in the creation of the artwork rather than an observer. This unique and evocative art installation consists of three films shot on Redcam, a series of 12 large scale prints and a floor installation sculpted with ten inch in height figures out of waste metal. For more information  and to see the film trailers go to: www.evewrightstudio.com and www.evewright.com And of course I’m designing all the print for the exhibition.

Now Dig This! Art and Black Los Angeles 1960–1980 chronicles the vital legacy of the African American arts community in Los Angeles, examining a pioneering group of black artists whose work and connections with other artists of varied ethnic backgrounds helped shape the creative output of Southern California. The exhibition presents approximately 140 works by 32 artists active during this historical period, exploring the rising strength of the black community in Los Angeles as well as the increasing political, social, and economic power of African Americans across the nation. Until 11 November at MoMA PS1. 22-25 Jackson Avenue, Long Island City, NY Hours: Thurs–Mon, Noon–6:00 PM. For more information visit www.momaps1.org

Stir It Up Film & Music Festival. A showcase of some of the best work coming from film and music industry professionals from African, Caribbean and Pacific countries, the festival offers performances, screenings and workshops. Additionally there are conferences on film and music, as well as other topics relating to Caribbean culture and world music. November 1, 2013 @ 8:00 am – November 30, 2013 Rose Hall, Montego Bay, Jamaica.

Afropolitain, a solo exhibition of images by Ananias Léki Dago presents works from three specific series that were developed over a six year period : Shebeen, Mabati and Bamako Crosses. While travel, or rather the discovery gained along the way, is essential to the work of Dago, Afropolitain is a visual notebook of encounters that have fed his numerous journeys. Documented in black and white, in these intimate experiences we see through the usage of acute details of the everyday, how Dago articulates his questions on the urban environment. Until Nov. 24  Fondation Charles Donwahi pour l’Art Contemporain  06 BP 228 Abidjan 06 Boulevard Latrille, face Eglise Saint Jacques Abidjan II Plateaux, Ivory Coast.  For more info visit http://fondationdonwahi.org/index.html

Jon Daniel is a London-based Independent creative director, designer and curator. For more information visit his website at www.jon-daniel.com  or his blog at www.visual-intellectual.com.

What is the most treasured object in your studio?

What’s the scariest brief you’ve ever worked on?