Some time ago design groups adopted the term ‘branding’ to cover everything that touched a brand, be it corporate, retail or relating to fmcg clients. As a result, it is now a catch-all phrase covering a range of creative activities, from full-blown corporate identity on the one hand to own-brand packaging on the other, with a few variables in between. This scenario is reflected in the main Top 30 chart, ranking independent packaging and branding groups according to financial performance. The charts reveal packaging as the dominant fee-earner for design groups claiming branding expertise, though both aspects are reflected in the findings.

Based on fee-income for packaging and branding work billed through consultancies’ UK offices, this listing is compiled in the same way that we put together the charts for the bigger Top 100 consultancy trawl each year – indeed, the data presented here is gleaned from forms submitted for the 2011 Top 100 survey by groups professing branding and packaging among the disciplines they cover. The full Top 100, covering all disciplines of design for the 12 months to December 2010, will be published on 26 May.

Given the importance of packaging in the branding mix, particularly in fmcg categories, it is no surprise to see Design Bridge and Jones Knowles Ritchie jockeying for position at the top of the packaging and branding chart. It was ever thus in the main Top 100 survey, though this time Design Bridge comes out decidedly on top.

Both commanded significantly higher fees for packaging and branding than any of the closest contenders last year, earning in excess of £10m, which is more than double that of nearest rival Elmwood, in third place. This line-up is replicated when we divide out packaging specialists from those working in the broader branding arena, giving a clear indication of what packaging is worth to design’s bottom line. Fees reported by the top packaging groups are generally much higher than their peers on the identity side.

In both the main Top 30 and the packaging Top 10, Elmwood leads the second tier of consultancies in financial terms. It falls well outside the Top 10 for branding generally though, with fee-income of £281 000, while neither Design Bridge nor JKR even figure. Several groups ranked in the charts have made forays
overseas in recent years, building on the UK’s reputation for great branding design to tap mainly into emerging markets. Most of the key players work for multinational clients, creating branding and packaging that has to work across cultures or be specific to certain countries, but they tend to work from UK offices. A handful have though set up shop abroad, following existing clients or developing relationships with new ones.

On the packaging side, Design Bridge has long had an office in the Netherlands. But Elmwood, Start Group and Moving Brands have been more adventurous, establishing global networks in line with local workloads. Having more or less successfully colonised the UK, with offices in Leeds, London and Edinburgh, Elmwood moved into Melbourne and Sydney more than five years ago on the back of work from Australian supermarket chain Coles. It has since established itself in New York through an office led by Eliot Schreiber, who has further global expansion in his sights.

Start Group has meanwhile broached the developing world, with work in Russia, India and the Middle East and an office in Hong Kong, run by Jonathan Cummins, to tap into Far Eastern opportunities. And Moving Brands – an innovative consultancy that often works along bigger branding groups to literally bring brands to life on screen – opened in San Francisco last year with co-founder Ben Wolstenholme moving across to run the office.

Anglo-Scottish group Navyblue, meanwhile, has a presence in both Oman and South Africa.

The packaging and branding charts show that even if all your interests are in the UK you don’t have to be London-based to succeed. Most consultancies ranked in the Top 30 have a strong presence in the capital, but Elmwood started in Leeds – where it still has its main UK studio – Blue Marlin started in Bath, though now is firmly ensconced in London, and 1HQ remains in Windsor. Navyblue has strong Scottish roots, though it has moved its new business function to London to give it a more international outlook. Loewy Group-owned Epoch Design is Bristol-based.

The listings here only reflect consultancies’ financial performance in packaging and branding, but this is only part of the story for some of the key players that boast expertise in other design disciplines. Structural packaging is a given for several of the groups listed, for example.

Looking down the Top 30 chart though, Start Group is also involved in interiors – largely through Manchester-based partner Judge Gill – and digital design. Seymour Powell is better known for product design and innovation. It has built a burgeoning packaging and branding portfolio since 2009 when it merged with Loewy Brands & Packaging within the Loewy Group stable.

Missing from this chart are the bigger multinationals, branding giants such as WPP stablemates The Brand Union, Coley Porter Bell, Landor Associates and The Partners, Omnicom’s Wolff Olins and Interpublic Groupowned Futurebrand. This is because as part of marketing services conglomerates with offices in the US, they are still precluded from submitting unaudited financial data for scrutiny by the Sarbanes-Oxley legislation.

For the main Top 100 league tables we take financial data registered at Companies House for the previous year to give them a separate ranking, but that is not sufficiently detailed for us to separate out earnings through branding and packaging. 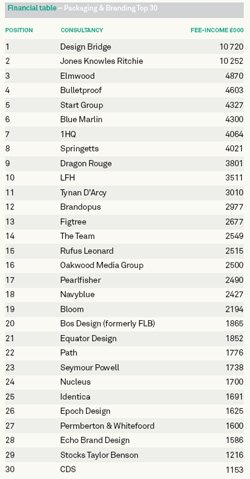 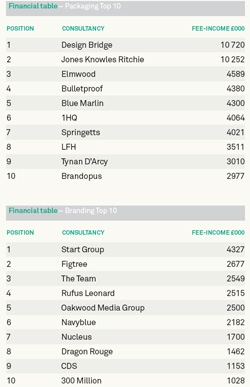 The data presented in all the financial charts derives from the Top 100 Consultancy Survey form 2011, published on Design Week’s website, www.designweek.co.uk, from January onwards and highlighted in print and online. All readers and site visitors were invited to take part and submit figures for the 12 months from January to December 2010. As part of the survey we ask design groups to split their fee-income by disciplines, including advertising, corporate branding, digital media, exhibition, interiors, packaging, print/literature, product and other. Design groups that professed fee-incomes in either/or packaging and corporate branding disciplines were combined to form the basis of the Top 30 chart. A further two charts were compiled to show the Top 10 groups in both corporate branding and packaging. The full Top 100, covering all disciplines of design for the 12 months to December 2010, will be published on 26 May. 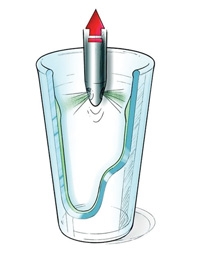 For years packaging specialist Design Bridge has jockeyed with Jones Knowles Ritchie for position towards the top of Design Week’s Top 100. This year it is set to be the victor, having earned some £500 000 more than its arch rival over the past year.

Based in London’s Clerkenwell, Design Bridge is one of the old guard of the UK design scene. Dating back to 1986 but still turning out good work, it has expanded its offer significantly over the years. It was an early adopter of structural packaging at a time when most of its competitors handled only pack graphics and moved into Europe in the 1990s, setting up in Amsterdam.

The early work was a blend of fmcg – confectionery for the likes of Terry’s of York – and sports branding. Now though, with the addition in 2003 of a Singapore office, Design Bridge Asia, led by Mark Budden and multinational clients, it is infinitely more international. It claims to work in more than 40 countries and has an impressive client list that includes the likes of Unilever and Tiger Beer on the fmcg side to branding for transport networks such as Dutch system Connexxion and Finland’s VR trains on the other.

A highlight of last year was the design of a shatterproof pint glass for the Design Council’s Design Out Crime initiative, set up to look at ways of addressing the problem of ‘glassing’ in pubs. Given this diversity, it is surprising to find Design Bridge leading the packaging design Top 10, but not figuring at all among the top groups for branding. Maybe next year.

_Start Group It is no surprise to find Start Group topping the charts for fees in branding. We have long tipped it as one to watch and it has succeeded on the international front in recent years where others have floundered as waves of recession have crossed the world.

Set up in London in 1996 by Mike Curtis and Darren Whittingham, Start Creative – the dominant brand within the group – integrated branding and digital work more or less from the outset. It has built a strong client portfolio including multinational sports brand Adidas, a number of Virgin Group companies and Virgin Atlantic Airways. Those relationships drove its overseas workload, especially in developing countries of the Middle East, Asia and Russia.

Such success has prompted it to set up two overseas offices, in Dubai to service the Middle East, and in Hong Kong to tap into the Asia-Pacific market. Closer to home, Start Creative forged a partnership with Manchesterbased Judge Gill in 2007, taking shares in the retail and brand experience specialist, which now also operates from London, and sharing projects where appropriate.

More recently, Start established Start Live, renaming events and experiential consultancy Anymedia, in which it took shares in 2008. This 360-degree approach to branding comes of an openness shared by Start’s founders. To this end, the London office – a lively space in Soho – is also home to a couple of design-related ventures such as illustration agency Breed.