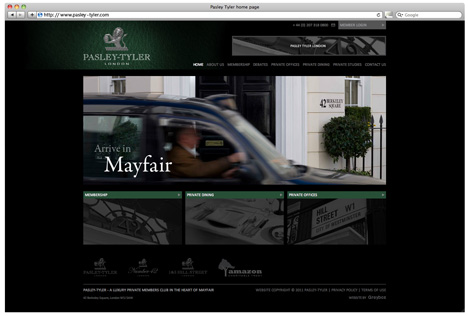 The consultancy has worked with the club for the last couple of years on other projects such as designing membership cards, brochures and banners, and was appointed for the website project in April this year without a pitch.

It was briefed to create a new site with increased functionality, including members-only areas and a booking form.

Greybox creative director Daniel Fernandez says, ‘With the existing site, things were getting lost. They wanted the feel of it to hit home the idea of it being a very private place, so we considered how we could translate the approach of the club into the site.’

The site uses a predominantly racing green and black colour palette, and features existing photography and an animation that provides a virtual tour of the club itself.

Fernandez says, ‘It was about showcasing exactly what the club offered without saying too much. It’s making members feel they’ve still got ownership of it.’

He adds, ‘It needed to capture the discretion. In that market it’s more about what you don’t say.’

The site is set to launch at the end of the month.

More than a third of art and design graduates are out of work, report shows