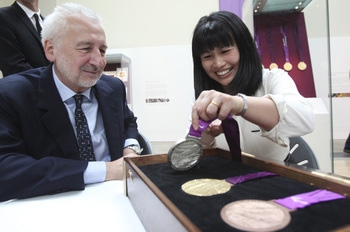 Cheung’s design was widely praised by the panel for its originality, a double-sided design which is inspired by Nike, the Greek Goddess of Victory.

Cheung took casts from the tunic and wings of the British Museum’s Nike of Paionion sculpture to develop the designs.

The Royal Mint, which also cast the winning Olympics medal designs by artist David Watkins, has played a key role in the delivery of Cheung’s design.

Led by design manager Gordon Summers, a cast was taken of the Nike statue’s wings and tunic using an inert two-part rubber compound – a paste, ‘sampled on other plaster models first’ Summers hastens to add.

It was the scale of the medal designs which gave Summers’ team its greatest challenge though. An ordinary medal would be struck once, but due to their thickness the Olympics and Paralympic medals have to be struck five times each with a force of 1600 tonnes per square inch to ensure the right pressure, before annealing (softening).

Over the course of the process CAD 3D modeling is undertaken before hand tooling for finishing.

Summers’s team all have a background in 3D design or product design and are trained to work in plaster for prototypes, CAD modeling and tooling. The team can work across sporting or military medals and currency design.

The Royal Mint design team ‘can be working on 50 or 60 briefs at any one time’ says Summers, who adheres to a series of internal standards checks. In the case of the Olympics and Paralympics briefs the Advisory Board, LOCOG and The IOC all had to give approval.

‘Were currently awaiting approval for the production of all 4700 medals,’ says Summers.

The gamut of briefs undertaken by the Mint covers a range of international government clients requiring currency redesigns.

For Summers these briefs are the most challenging.  Designing with cultural and religious sensitivities in mind is vital he says, especially as in some cases a brief might be as simple as ‘we want nine new coin designs’, he says.

Summers adds, ‘We might be producing coins for people who are illiterate, so there is a need to avoid complex inscriptions.’ Often the solution is a set of symbols of neutrality such as exports – which aren’t divided on social, cultural or religious grounds.

Despite undertaking ‘a huge amount of research’ Summers concedes ‘sometimes you can get it wrong.’

Working for Nigeria the mint’s initial approach was to use historical art, but this referenced both Christian and Muslim beliefs, creating a potential for tension, so a solution was sought using Nigerian bank notes.