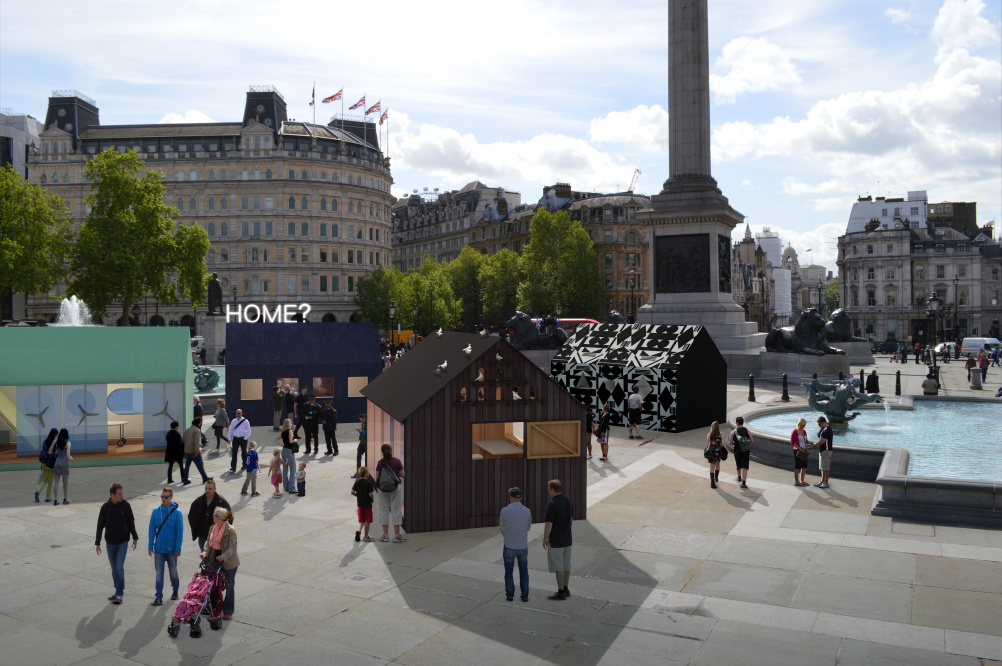 Last year Trafalgar Square stood empty during LDF, with the festival’s landmark project appearing instead outside the Tate Modern in the form of an M.C Escher-inspired endless staircase.

The title of this year’s Airbnb piece and the fact that four very different designers have been commissioned is meant to be reflective of the breadth of weird and wonderful properties like loft spaces and tree houses, which are on Airbnb’s books. Crucially, these are by-and-large people’s homes, which have been vacated for rental.

It is this conceit, which allows the four designers to express their own weird and wonderful evocations of home.

This sets up, potentially at least, an unbridled vision of what the designers believe home can mean and what it can be.

Jasper Morrison, normally known for his subtle work, has designed a home based on a pigeon fancier’s house – ‘Because who else would chose to live in the middle of Trafalgar Square?’

Morrison’s design will address the needs of a fictional pigeon enthusiast and feature an ordered interior inhabited by a person who enjoys an uncomplicated pastime.

The pigeon fanciers’ paraphernalia sits with Morrison’s furniture and a few embellishments like pigeon portraits and outside a dovecote mounting, perches and roosting boxes.

Consultancy Raw Edges has taken inspiration from rolling archive stacks for its home, which offers a transformable space revealing different rooms only when the occasion demands it.

This means that variously a bedroom, living room, kitchen and bathroom can be created when needed by cranking a handle and setting three panels in motion.

A pendant light hangs from the centre of the room and acts as a single light source for all room arrangements.

Meanwhile concertina beds and lounge hammocks fold away as other rooms reveal themselves, but perhaps the most ingenious detail is a shower-head which doubles up as a kitchen shelf.

The message of the house as a whole is that space saving ingenuity can create comfortable living in urban areas where room is scarce.

Ilse Crawford’s Studioilse has turned the exhibition title into a question, and asks visitors what home means to them. The ‘mundane yet comforting’ aspects of home life are referenced in a ‘playful and poetic’ way according to LDF.

A soundtrack of boiling kettles, slamming doors and rattling cutlery will be audible through windows in the house, which will also emit familiar smells. These are being designed with fragrance expert Azzi Glasser.

Two walls will show projected films of household objects and domestic scenes present in a variety of home types and cultures.

The question, ‘What does home mean to you?’ will be written on the floor and visitors are encouraged to respond via twitter.

Patternity, a research studio, which concerns itself with all things patterned, has used its house as an explorative canvas for pattern.

The interior of the house contains three giant kaleidoscopes, which will   ‘symbolically reflect the world around us through repeated pattern’, according to LDF.

Each pattern, made up of ‘the building blocks of life’ can be manipulated and played with by the public.