That Hybrid discipline, the digital installation, is coming into its own. No longer purely the domain of futuristic exhibitions and big corporate shindigs, such modern-day magic could even find itself applied to community projects and the public realm. That is certainly the experience of Land Design Studio and Jason Bruges Studio, with the latter increasingly facing the challenges of creating permanent outside installations, not just temporary ones in nice clean interiors. Meanwhile, practitioners like AntiVJ are starting to play with so-called ‘augmented reality’, where physical objects appear to change in front of your eyes. It all has the potential to take definitions of experiential to a new level.

Mapping Festival: AntiVJ
AntiVJ, a group of Bristol-based European artists, focuses on the use of light and its influence on our perception of space. It says its video projections are at the crossroads of installation work, live performance, graphic design and architecture.

The group is making a name for itself on the festival circuit, and this year has had creations on show at Montreal’s Mutek and Elektra festivals, Nuits Sonores in Lyon and the Futuresonic event in Manchester.

For last year’s Mapping Festival at the BAC Centre in Geneva, AntiVJ worked with an electronic musician. It designed a series of boxes which the festival organisers then built in plaster. ‘We mapped every single one so we could project on to every side,’ says Nico Boritch, who co-runs AntiVJ. Mapping allows you to project on to any 3D object, rather than on to a rectangular screen, he explains.

‘We like quite minimalistic visuals, white lines or simple colours along the edges,’ he adds of his animations. AntiVJ is now developing software to create visuals in real time.

For the future, the group wants to choose a building and design a structure jutting out of it. ‘It would be like a temporary physical extension, to give the building another dimension and create a coherent new object, and the whole thing would be a canvas for projections to play with optical illusions,’ he says.

Sutton Life Centre: Land Design Studio and Curl La Tourelle
Land Design Studio is using digital skills it has developed in the commercial world and applying them to a community activity. ‘This is a new frontier for digital,’ says LDS founder Peter Higgins.

Instead, the Sutton centre will house a district library, space for youth activities, outdoor sports facilities and garden, as well as the experiential Life Centre. Once it opens in September 2010, it is hoping to attract 40 000 visitors a year.

In the centre, nine- and ten-year-old children are exposed to and taught about life skills and citizenship issues like knife crime, gun crime and drugs, as well as sustainable living and nutrition. ‘They are informal learning centres dealing with issues off the national curriculum,’ says Higgins.

Land’s contribution is described as a ‘combination of scenographic, filmic and theatrical events’, with digitally generated environments that incorporate high-quality projection to create interactive sensory environments constructed with dynamic sound and lighting.

The consultancy is building a studio area, which will be partly three-dimensional and partly digital. The plan is to video scenarios that deal with crucial issues.

It’s an interactive installation using Dyson’s motorised light, Motorlight Wall. ‘Jake invited me to his studio to have a look as he was developing it. I was excited about using the lights on a larger scale, and creating something that was “gestural” and had a lot of expression,’ says Bruges. ‘He had a pre-programmed remote that you could interact with. You could create animations and effects that were very alive.

‘He suggested creating an installation with them. So we developed a computer-controlled beta version, to create amazing shows and installations.’

For Milan, the lights easily lent themselves to creating interesting circular patterns. ‘If you arrange them in circular clusters, you get spirograph patterns with interlacing beams. We hid the technology in the lamps and had big ocular reveals, myriad patterns suggesting synchronised swimmers. A number of them were synchronised to perform to the audience in the gallery,’ says Bruges.

In Bruges’ view, trade shows are often just about the product, but he says,’It’s the application that gets people fired up, rather than the products. This was a very different way of displaying a product.’ 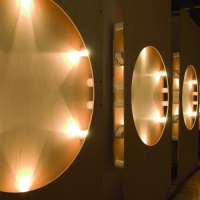 An interview with Javier Mariscal