“It’s got to be the homemade placard made by an older lady at a recent women’s march that read ‘I can’t believe I still have to protest this shit’, and which went on to inspire many other iterations. Printed out on two A4 sheets of paper stuck onto a bent bit of cardboard, it is one of the strongest pro-feminist pieces of design I’ve seen. Donald Trump’s America, Weinstein, #MeToo, the President’s Club gala and the rest has propelled feminism to new heights and it’s rightly all over the news and social media – but this placard reminds us that we still have a very, very long way to go.”

“I was blown away by the impactful simplicity behind the #changethepicture campaign by charity the Campaign Against Living Miserably (CALM). There’s a very quiet sexism in the old adage of ‘boys don’t cry’ and both genders can be equally guilty of committing it, often with honest intentions. The drastic male suicide statistics speak for themselves; the trappings of masculinity is a complex, multi-layered problem. This campaign, while aimed at guys, is powerful, inspiringly honest and will resonate with every single person who has suffered from the make-believe world of social media.” 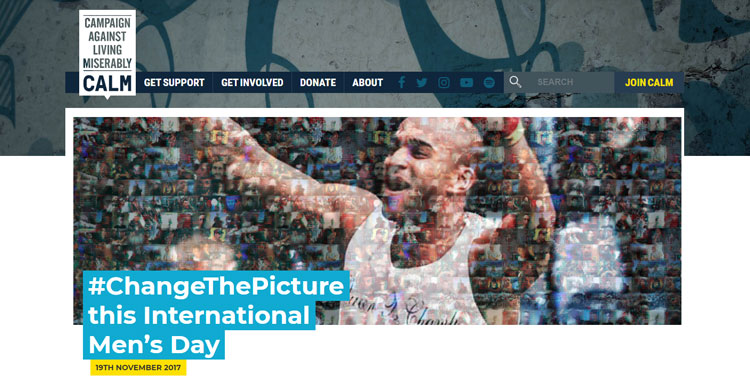 “Who received a unisex scent this Valentine’s Day? The idea that a woman should smell of delicate florals and a man of smoky wood is being overruled by the rise of unisex and made-to-share fragrances in unfussy, intentionally gender-neutral packaging.

I’ve seen perfume brands like Byredo leading the way with its clean, understated packaging that markets the quality of the product, rather than who it is for. When you really think about it, there is no defining characteristic that makes a scent intrinsically feminine or masculine; it’s all a result of gender ideology and years of powerful marketing.

Another beauty brand – and possibly my favourite – that doesn’t play to individual genders is the Aussie label Aesop. Its skincare range is founded on shared attitudes and values, and communicated with sophisticated simplicity. When you enter an Aesop store, there are no glossy packs, counters or adverts promising eternal beauty. Instead, you will see matter-of-fact statements about ingredients and honest discussion about efficacy.

It’s an exciting time for graphic designers at the moment. Instead of working with tired, traditional visual cues that express femininity or masculinity, there’s a sense of new-found freedom as we focus on functionality in design.”

“‘Votes for Women’ was the weekly paper published from 1907 in support of the Women’s Social and Political Union (WSPU), the militant suffrage society founded by Emmeline Pankhurst. As such, the paper both disseminated news of the Suffragette campaign and acted as a bond between WSPU members.

This poster, designed by Hilda Dallas (1878-1958) – who trained at the Slade School of Fine Art in 1901-1902 – is bolder than it may look to us now. By standing in the road, bearing an advertising placard, the jaunty young woman is transgressing society’s norms. This was not accepted behaviour at the time and WSPU newspaper sellers recounted the abuse, sexual and otherwise, that they received from passers-by – but they persevered.” 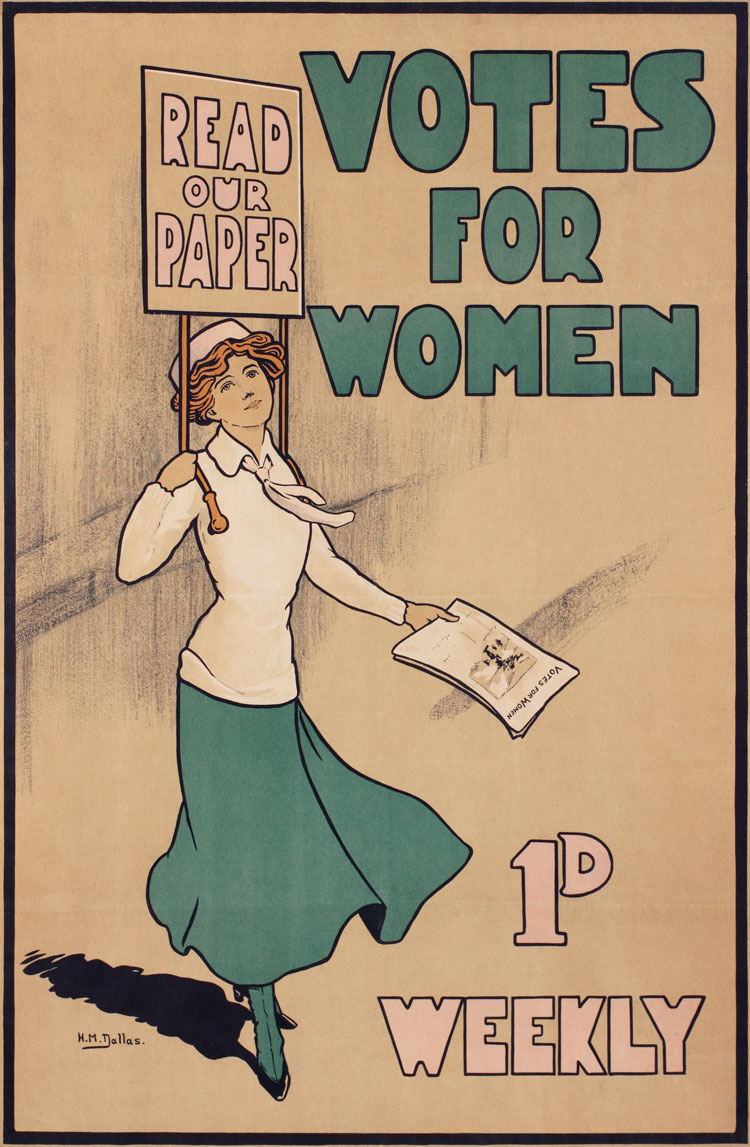 “As a new parent with a little lady in tow, I’ve suddenly become aware that a large part of the world wants her to be brought up with the sole intention of being a princess in pink. I was quite impressed that John Lewis took the bold move to create a new brand bringing all of its kids’ clothing under one gender-neutral label. This sets a good example to thousands of parents and other high-street brands, and starts to break down gender stereotypes that are ingrained from birth.”

“Fearless Girl by Kristen Visbal is a bronze statue that was installed under the cover of night on New York’s Wall Street on 7 March 2017 – the day before International Women’s Day.

The Latina girl – standing in an Amy Cuddy-style ‘power pose’ and facing off a charging bull –  prompted debate across Manhattan and beyond.

Whether or not you agree with the ‘corporate face of feminism’, the power of the statue is unarguable; her defiant and irrepressible features depict a girl fearing nothing.

Among an urban landscape where most statues representing the female form are allegorical or fictional, this young girl becomes identifiable as a daughter, sister or friend of the thousands that flock daily to link arms with her. Perhaps this is in the hope that her fearlessness will inspire other women to achieve their potential, and help change what has traditionally been a ‘man’s world’.

“Much that it may be something of a cliché, my favourite example of design combatting sexism is J. Howard Miller’s ‘We can do it’ poster (more popularly known as ‘Rosie the Riveter’). While it’s now one of the most famous icons of feminism, it was originally created as a motivational poster – for both men and women – during the Second World War, when the influx of women to munitions factories and engineering changed the path of women in work forever.

I love how positive, empowering and unapologetic its message is, articulating that women don’t want special treatment, they just want to be regarded as equals. Given how much it still resonates, it was leagues ahead of its time, and reinforces to me how important it is for men and women to be equally involved in moving the balance forward.”

“A golden oldie by the Guerrilla Girls springs to mind — a classically-posed nude woman with a gorilla head challenges the balance of women in the art world – 5% of artists in the Metropolitan Museum of Art being women, versus 85% of the nudes on display being women. Graphic and straight to the point, I love this approach.

A more recent favourite is the Princess Leia poster created for a women’s march. By subverting a classic sexist saying and combining it with a cultural heroine, this poster is simple in its execution but totally effective in its challenging, and female-empowering message. Taken up across the world as a flag to march under, it shows how images continue to play an important role in social and political engagement.

Other favourites include: Elle, Wieden+Kennedy and Mother London’s Sod the Stereotypes Ad from 2013, almost all the posters and prints created by the See Red Women’s Workshop collective (and published in a beautiful book by Four Corners Books in 2016) plus Sport England’s 2014 advert for its #ThisGirlCan campaign (set to Missy Elliott’s ‘Get Your Freak On’ — I was punching the air and ready to start three new sports by the end of it).”

“A great example of design that combats sexism is Shepard Fairey’s We the People series of posters that became powerful emblems of the women’s marches. Using the same style as the iconic Barack Obama Hope poster, these graphics represent inclusivity: a woman in an American flag hijab, and a Latina woman with the slogan ‘Defend Dignity’. What’s really powerful is that the designs were made available for free, being inclusive in both spirit and reality. With the first line of the US Constitution – ‘We the People’ – prominent on the posters, it’s a simple yet powerful reminder that governments represent everyone and ultimately people’s voices won’t be silenced.”

“Amalgamating sharp-wit and incisive comment, and a forerunner to much of the biting humour displayed in the recent women’s marches, the ‘iron’ logo of feminist publisher The Women’s Press says it all. In the late 1980s straight from college, I was a junior designer there, working under visionary art director Suzanne Perkins. I laughed and cried in equal measure, pasting up logos on spines and title pages alike. ‘Steaming ahead’ said one, while others incorporated burn marks and shocking, fluorescent, DayGlo pink. Drawn originally in black and white by illustrator Donna Muir, Suzanne set about adding colour and developing multiple versions of the logo, which proudly adorned shop windows, cakes, book covers and spines… let’s keep steaming ahead, I say.”

What’s your favourite example of a design that fights sexism? Let us know in the comments below.