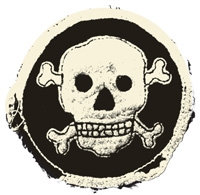 I’m inspired by the lives of good people. Like an 86-year-old father-in-law whose eyes light up as he recalls getting his ’death head’ swimming badge (pictured) aged 11 for one-and-a-half hours non-stop swimming in open water, in Berlin, in the winter, with a man in a wooden rowing boat just behind him to make sure there were no stops.

By a 16-year-old son with an amazing, natural ability for taking fantastic photographs. By a seven-year-old daughter who has a way of wearing anything and making it look cool. By a friend who has taken on the responsibility for raising two young, abandoned, troubled kids, even though his own have just left home. By a brother, who, without being able to swim, becomes the skipper of his local lifeboat crew.

These are just some of the stories from people close to me, and I hear plenty more from people I meet every day. None of them would make the Ten O’Clock News. But they’re all examples of why people are so fascinating and why being in a trade that requires us to understand what makes people tick is never dull and always inspirational.