Most people know what a Trunki is. The colourful ride-on children’s suitcases are a common sight at airports; by 2016, over 3m of the product (which launched a decade earlier) had been sold. Whether it takes the form of a unicorn, tiger or London bus, it’s become a mainstay at terminals worldwide. A lot of people are also familiar with the story of Trunki. Rob Law, product designer and founder, brought his product onto British television show Dragon’s Den – where a panel of business experts analyse potential ideas and decide to invest – and walked away without a deal. Law went it alone and things paid off. Appearing on a national television show did little to harm brand awareness. A second product, BoostApak – a booster seat come backpack – was released in May 2010. Last year, sales for Magmatic (Trunki’s parent company) hit a record of £9.5m. Duncan Bannatyne, one of the show’s ‘dragons’, admitted that the one regret from the show was that he did not invest in Trunki. Going to the airport is likely a painful reminder for the businessman.

Not as many people know that Law was born with cystic fibrosis; a part of his life explored in his new autobiography, 65 Roses and a Trunki (children often refer to the condition as ’65 Roses’). The genetic disease affects the lung and digestive system, and people born with the condition usually have shorter-than-average life spans. The book’s being billed a guide to life and business, and is threaded with challenges that he has overcome in his personal and professional life.

Law tells Design Week that he has been frequently asked to write a book, but that he has not widely talked about his condition. Now, at a point of storied success, he says it would have been “almost selfish” not to share it. “If I talk about my personal background, growing up with cystic fibrosis and how those challenges have shaped who I am,” he says, “then that would have a wider remit and help people realise they have the mental strength to overcome their challenges and fight their demons.” The time too is right. “I’ve never wanted sympathy,” he says but now he can reveal the “deeper drive” behind his work. Law also now works a three-day week, which has freed up time to speak at business events and write a book.

An empathetic approach to design

How has cystic fibrosis affected his design approach? “Empathy,” Law says. “Design is a very empathetic process,” he adds, and time spent with the disease has helped him harness that. One of the “frustrations” he has when looking at design graduates is that they often design products for themselves. “When you’re a design professional, you have to design products for a vast range of demographics and people,” he says. That skillset is invaluable, Law says. The condition also has a more practical effect. Thinking that he would have a short life meant that he wanted to make the most of it; “the relentless focus I had to learn all I could about product design, and all the skill set involved, was partly because I knew my life would be short.”

The book chronicles challenges from the life-threatening – his twin sister Katie died from the same illness at 16 – to the logistical and professional. When he was trying to get Trunki into shops, toy departments said it was luggage, while luggage departments said it was a toy. Law is also dyslexic, and was put in special needs classes at school. It was when he was 14, having enjoyed working with his hands, that he discovered product design, inspired by the likes of Richard Seymour and Dick Powell. He ended up receiving his BA in Industrial and Product design at Northumbria University.

The road to Trunki 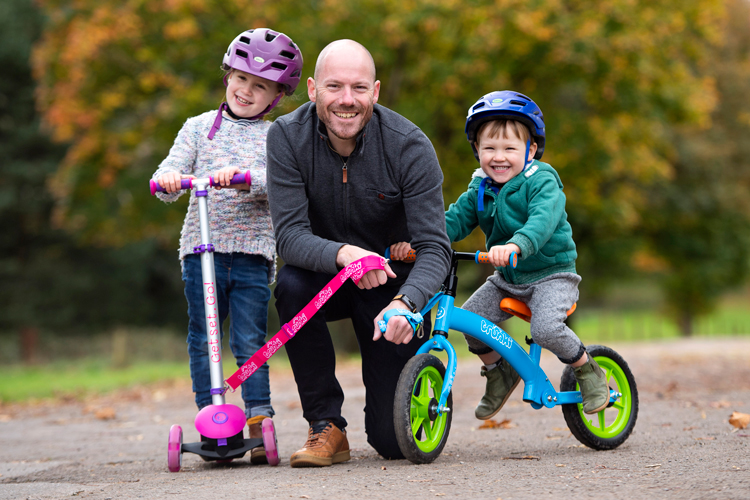 Success was not immediate. One set-back that features in the book is from a time straight after university, while he was working as a product designer in Taiwan. He was working with a medical machine manufacturer on a product that helps stretch patients’ bodies to correct spinal process. It was a “torturous process”, he says and the product looked like a “torture machine”. His idea was to “soften” it and make it look more “inviting”. The owner of the company became angry and refused.

The one goal of a product designer is to get a product into the hands of a consumer, he says. The Eureka moment was inspired by seeing ride-on toys at a store’s children’s department and looking at the engineering that went into luggage. “It was my best chance to get a product on the shop’s shelves,” he says. No matter how successful a product becomes, it takes a lot to get them off the ground. And Law found the market initially doubtful. It was only after Dragon’s Den aired – around six years after ideation – did he realise that consumers got it straightaway. “We sold out,” he says – despite manufacturers, retailers and investors not understanding the product previously.

Less child-friendly was a high-profile court case with a copy-cat rival manufacturer, Kiddee (owned by a Hong-Kong-based company). It was taken to the Supreme Court but Trunki lost in a case that raised many pertinent issues around copywright for the design industry. The Supreme Court stated that while it had “sympathy for Magmatic” and that “the idea of the Trunki case was a clever one”, the “Design Right is intended to protect designs not ideas”.

Instead of wallowing in defeat, Law found positivity in the outcome. He supported Anti-Copying in Design (ACID), and encouraged designers to document their paper work as a way to prove their originality in the design process. This helped with regards to Trunki’s clasp feature, which Kiddee was not allowed to use. The real challenge, Law says, is for designers to work out where to register – especially in a globalised marketplace. He calls the European design registration system “fantastic”; with a relatively small amount of money, you can get a design registered across all 28 member states. Brexit, of course, has made the future of design rights uncertain once again.

“Use your energy wisely”

The reaction to the court case loss is indicative of the way Law approaches life, by focusing on what he can control. Until there is a cure for cystic fibrosis, he can only focus on staying as healthy as possible for example. He cannot control lockdown – or when the government might ease travel restrictions – but he can alter the brand’s messaging to focus more on staycations rather than air travel. “It’s about using your energy wisely,” he says.

With hindsight, Law says it was actually an “advantage” to have a product he could not patent. (“You cannot patent a ride-on suitcase, you can only protect shapes.”) “I would have wasted all my start-up capital on intellectual property in the UK and one or two other markets, and I wouldn’t have any spare cash to invest in marketing.” Without patents being a “millstone around his neck”, he was able to build a brand.

About that branding. Trunki calls itself a team of ‘big kids’. Its headquarters (of around 30 people) is a converted chapel in Bristol which is known as ‘The Mothership’. It has a slide. There’s a culture of playfulness at the company – Law’s email sign-off is ‘Trunki Daddy’ – which is fitting for a company dedicated to children. The visual identity reinforces this. There’s a roundel logo which takes the form of a smiley face – it appears on almost all Trunki products – which is important for the toddler demographic. Circular graphics abound everywhere, as a nod to movement. There are regional differences too: Scandinavian countries like pastel colours, America and China like vibrant tones, and purple is a no-go in Northern Europe where the tone is seen as funereal.

How will COVID-19 affect product design?

COVID-19 presents problems for a company based on the idea of children’s travel. There’s been less “headspace” to think around new designs, he says. Luckily, the brand has diversified. A recent range, in collaboration with Halfords, introduced fold-up bicycles and scooters for children. The product was inspired by Law’s own children. When he’d take them out on trips, they would take ages to follow, so he ended up tying a Trunki strap to the handlebars and towing them along.

Lockdown has also resulted in a “back to basics approach”. It has meant that Law has been spending a lot more time with his three children. He now wonders whether they need to go to kids’ clubs and activity sessions. This will, inevitably, affect the output of Trunki products, though Law does not know precisely how yet. An immediate priority is making the business digital-first.

Of recent changes in the design industry, he says he’s excited by funding platforms and the increased number of ways to get products into consumers’ hands. The explosion of e-commerce over the past decade has been hugely important to Trunki. While many products launch as direct to consumer nowadays, this was not always the case, Law points out. “The opportunity is there for designers who think they can get products to market,” he says. “It’s like a cottage industry of craft people getting their products out.”

The timing of the book launch is fortuitous too, Law notes. It’s a book about resilience amid a time where uncertainty abounds. He is sanguine about the outlook for businesses. “I think all businesses are going to come out stronger, if they do come out of it,” he says. If they don’t come out of it? “It’s very sad but sometimes those businesses may not have had a sustainable business model in the first place.” Law admits that this sounds “a little cold” but likens the situation to a forest fire. “There’s a big catastrophic thing and out of that come green shoots and it’s a level playing field.” Trunki itself came out of the 2008 recession, he points out.

There have been many milestones to Law’s career. The first million made in revenue, for example. Meeting the queen to receive his MBE (to which he brought a corgi-themed Trunki). And the book is a recent highlight. The most memorable to him, was taking his daughter through Edinburgh airport at the age of 18 months. The relatively mundane act was unusual: Law was not supposed to live past his early twenties, or be able to have children. “Yet I was towing my daughter through an airport, on a product that I had been told was worthless,” he says. “I remember thinking I was on a journey I wasn’t supposed to make.”

65 Roses and a Trunki: Defying the odds in life and business is out now, published by Wiley.