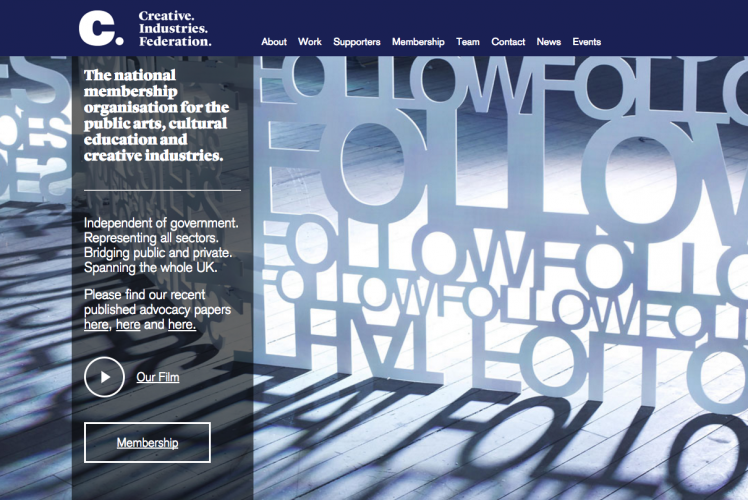 Creative Industries Federation have released results of a survey showing that its members are overwhelmingly in favour of remaining within the EU.

The survey was taken by roughly 200 out of 1000 Creative Industries Federation members, which includes people from creative industries such as design, architecture, craft, fashion, music and museums and galleries, and those involved with creative education.

The poll showed that 96% support the Remain vote and only 4% are in favour of Leave. Some 84% of respondees also cited membership of the EU as important to the future of the company or organisation they work for.

Reasons given for wanting to remain in the EU include overseas trades and exports that affect the UK’s creative industries, talent arising from cultural diversity and access to EU funding such as arts grants and innovation funds.

The UK is currently supported by EU frameworks and programmes such as Creative Europe, which provides €1.46bn (£1.1bn) to Europe’s cultural and creative sectors, and Horizon 2020, an €80bn (£61bn) innovation and research fund.

According to CIF, the UK creative industries contribute £84.1 billion to the nation’s economy.

Sir John Sorrell, chairman at the Creative Industries Federation, says: “Our position as a vital European creative hub is a huge part of this success – we benefit from a vast network of talented people, companies and institutions across Europe.”

Prime minister David Cameron, who is backing the Britain Stronger in Europe campaign, has also backed the research, which was launched at an event he hosted discussing the relationship between the creative industries and the EU.

Cameron says: “When it comes to creativity, British talent and expertise has made this country the envy of the world.

“The results of Creative Industries Federation’s survey are clear: we are better off in a reformed European Union than out on our own.”

A survey carried out by Design Week in February found that 70% of readers wanted to remain in the EU, with 16% in favour of leaving and 14% undecided. More than 500 people were surveyed.

The EU referendum is due to take place on 23 June.