D&AD has revealed its 2021 award winners, including three Black Pencils, in a year which celebrated social issue-based projects.

This year, the judges awarded three Black Pencils, the highest level of award. A further 19 Yellow Pencils were handed out, the second tier of recognition.

AMV BBDO was awarded a Black Pencil in art direction for #wombstories, a project which featured women animators from around the world exposing the narratives and taboos around the experiences of people with wombs.

McCann New York won the top award in the experiential category for True Name, a collaboration with Mastercard. The project sought to support the rights of transgender and nonbinary people to use their chosen names on credit cards.

True Name was inspired by the idea that these groups can find it painful to use names that do not represent their identities on their credit cards.

The final Black Pencil was awarded to FCB Chicago for Boards of Change. This spatial design project turned plywood storefront barricades used during the Black Lives Matter protests into polling booths during last year’s US election. 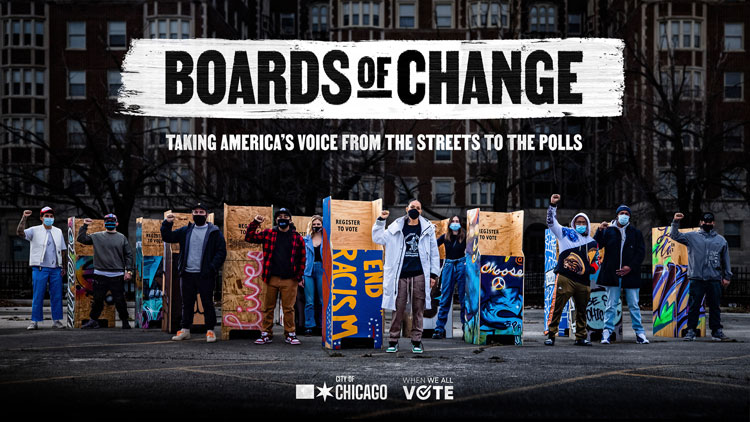 Boards of Change “brought America’s disenfranchised voices from the streets to the polls”, according to D&AD.

The project, which won three Wood Pencils in art direction, experiential and direct categories, “inspired residents in dozens of Chicago’s low-turnout neighbourhoods to create systemic change through the power of their votes”, adds D&AD.

Projects tackling racial equality and representation were also recongnised in this year’s awards. Google Brand Studio won a Yellow Pencil for its Search Black-owned feature which allows businesses to display that they are black-owned on the search platform.

Meanwhile the immersive experience Voice of Racism – created by New Zealand’s Clemenger BBDO – which collected over 200 people’s experience of racism was awarded a Yellow Pencil.

In the illustration category, a Yellow Pencil was awarded to US magazine Vanity Fair for its September 2020 cover of Breonna Taylor, a black teenager who was shot and killed by Louisville officers during a police raid.

For packaging design, the Bee Loop Honey Pot was awarded two Yellow Pencils in the material and limited edition category. Created by Lithuanian designer Aurimas Kadzevičius, the zero-waste honey pot is made of beeswax and organic linen and is 100% edible and digestible.

Mother’s LA branch won a Yellow Pencil in the writing for design category for its work with food delivery brand Postmates. Billboards carried taglines such as, ‘Don’t let breakfast bully you into putting pants on. Postmates it.’

The three most awarded design studios were Collins, Jones Knowles Ritchie and Superunion. Collins won five pencils in total. These include two Yellow Pencils for its work on investment app Robinhood’s brand identity (which was also won in the illustration category) and its dynamic logotype for the San Francisco Symphony.

2021’s President’s Award – which recognises industry figureheads – was awarded to director of production company Kim Gehring. She has produced several issue-led projects, including This Girl Can and period poverty campaign Viva La Vulva.

D&AD president and Pentagram partner Naresh Ramchandani says that Gehring’s win epitomises how the industry can put “social purpose at the heart of commercial success”.

You can see the winners in full here.

Remembering Ken Garland: “A man you quickly run out of words to describe”