Design Week: What inspired you to be a designer?

Marina Willer: I’ve always followed a creative path. My family has a design and creative background – my dad is an architect, my mum an artist, and my brother is also an architect. I was encouraged from a young age to do all kinds of creative work. I’m interested in many different things – I feel design merges storytelling with the creation of imagery, so it felt like the right route for me. I also do film-making, and that’s another important part of my creativity.

DW: Can you tell us about your career journey?

MW: I went to college in Brazil first, and was very underwhelmed. Brazil is an incredible creative space where people have to improvise, create solutions and use their imagination. But in terms of graphic design, it was not as exciting as I’d wished.

I worked in advertising there for a while, and learnt a lot in terms of thinking through ideas but decided I needed to push myself harder – plus, advertising was never what I wanted to do anyway.

So, at the age of 27, I moved to the UK and applied to the Royal College of Art (RCA) to do my masters. This was a real transformation for me and opened up my mind to communication and art direction. This was a period of great change in my life, and I met some incredible people. Margaret Calvert, who won the Design Week Hall of Fame Award a few years ago, stands out for me. She is an incredible thinker and believed in me, and taught me how to instigate much more profound purposes through my work.

After the RCA, I moved back to Brazil briefly, then back to the UK again in my early 30s. I was soon hired by Wolff Olins, and didn’t leave for 13 years, then joined Pentagram as a partner in 2012.

DW: What’s been your biggest challenge to overcome along the way?

MW: When you’re young you’re not very confident. I see that in a lot of the people who work with me. But if you’re brave and you believe in yourself, it really helps you get your work noticed. The biggest challenge for me was coming from another country, culture, language, everything. It was hard to feel that I was going to have a space and that my voice was valuable.

Also, I’ve felt challenges as a female designer throughout my entire career. The more senior you get, the more those spaces are totally dominated by male designers. The way the world is means they are thought to be more confident, to have stronger voices, and these were spaces where others could be very pushy. I’ve had to learn to have a tougher skin, and survive without losing the ability to be kind and generous to people as well.

DW: What’s been your proudest moment?

MW: Creating the identity for the Tate museum when I was at Wolff Olins in 1998. I was only 30, so quite young, and it was very competitive. If I was doing it today, I’d be more experienced and know how to get to the answer more quickly. Nick Serota, the director of the Tate at the time, was able to spot something unique in me, but other clients would have dismissed me or tried to push me around. Lots of people have great ideas but they don’t survive the journey.

It was a turning point in learning to deal with things and believe in my own ideas.
My other proudest moment is making my feature film Red Trees, which launched last year. This was something that meant a lot to me, but also had a wider purpose of doing something for the world.

DW: What’s been your most difficult moment?

MW: There are moments when you lose a big project you think you had. For me, that was when there was a pitch to refresh the Tate identity in 2015 and we lost to studio North. As a designer, and the one who helped create it, that was hard. When you’ve worked on a project, you have a special connection with it.

Other tough moments have been when I’ve lost people who were really valuable and important to me. The entire team changed at Pentagram London at one point, because everyone was going through life changes and challenges. It was tough to lose them, both emotionally and practically. Then of course, making a film was extremely tough, too. 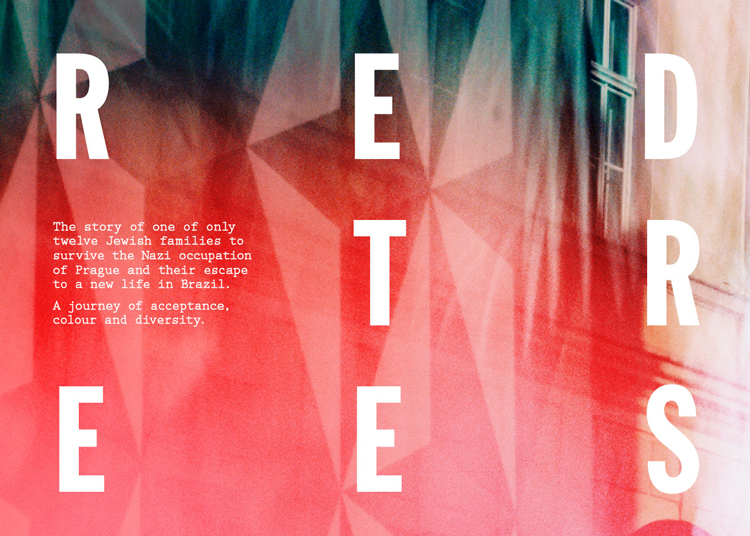 DW: What inspired you to move into film?

MW: I see all creative areas around design, imagery creation and storytelling as one, big connected thought. Designers today have to be aware of the different dimensions in which we can express things. I was lucky in that at the RCA, I was taught by a lovely tutor called Lol Sargent about audio-visual (AV) and moving image.

There was something fascinating about learning to produce film before the digital revolution. Making images practically frame by frame really connected to what I do as a designer. You have to be really thoughtful, and value the timing, the imagery, the words, the sound. Now, I obviously work in an extremely digital way so I’ve had the opportunity to see the before and the after.

DW: You also judge awards such as D&AD and are an external examiner for the RCA. What do you look for when judging and examining?

MW: At the RCA, we set the bar really high in experimentation – we don’t want to see the same work we see in the industry. It’s about thinking of the future of the profession. The definition of design is changing so much, it involves so many things. We look for both a specialism or craft in typography, imagery or making for example, but also the ability to be quite broad.

With professional judging, this need to think of what’s next is still valid, but also designers need to show relevance and truthfulness. Sometimes people create work just for awards and that’s not acceptable. It’s great to be really outrageous with your ideas but it also needs to work in a professional or commercial environment. A combination of the two makes up the things that we pick.

DW: What do you think makes a piece of design brilliant?

MW: The uniqueness of the solution but also the ability to respond to whatever the need is. If it’s self-initiated work, it has to be really inspirational and say something powerful to the world. If it’s commercial work for a client, it has to be unique and achieve impact but also respond to the brief – otherwise design becomes self-indulgent and all about style.

DW: Do you have any advice for anyone getting into design now?

MW: Throughout life, cultivate the ability to find and collect inspirational ideas and thoughts. You have to be curious and want to learn all the time. Collect thoughts, even if they seem irrelevant. Beautiful things, funny things, memorable things – they all form part of a mental sketchbook of things that you’re interested in.

Don’t just find inspiration in design books or on blogs – of course, it’s good to see what’s going on to stay relevant and avoid repeating other people’s work but it’s not the sole way to find ideas. You need to collect ideas from everywhere. Then when it comes to professional work, you’ll join your strategic understanding of the task with those mad things you’ve found through life, and it will all become useful or meaningful somehow.

Marina Willer is now part of Design Week’s Hall of Fame. Check out the full Hall of Fame here, and read about all the Design Week Awards 2018 winners here.