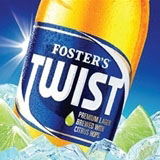 Foster’s Twist, the first extension to the Foster’s brand in almost ten years, will launch this July from brewer Scottish & Newcastle, with packaging design by BR&Me.

The company spent £309m on the rights to the existing three brands – Foster’s Draught, Foster’s Export and Foster’s Ice – and intends to develop further brand extensions.

Foster’s Twist will be citrus-flavoured and sold in a twisted, cut-glass bottle. Its launch will be backed by a multi-million pound marketing campaign and the range has been designed to increase the appeal of the brand to a broader audience, according to a S&N spokesman.

Designers look set to benefit further as S&N takes the opportunity to develop a brand that has seen little enhancement since the launch of Foster’s Ice in the mid-1990s. Previously, the brewer only had a licensing agreement to brew and market the beers, while ownership of the brands remained with the Australian parent company, Foster’s Group.

According to the spokesman, the purchase means the company is now ‘the sole custodian of the brand’ in Europe, which will enable it to develop a number of ‘major initiatives’.

‘Previously, we had a licensing agreement, so virtually everything had to be agreed, first, with Foster’s in Melbourne. There were tight regulations on how it looked and what we could do,’ he explains. ‘It took too long to negotiate things and cost us more money [than it was worth].’

Although the core Foster’s marque will remain untouched, the group now has the freedom to explore brand extensions, adds the spokesman.

‘There is still a protocol that protects the primary Foster’s logo globally, but we don’t have to get into a debate with Melbourne on packaging and colours and so on,’ he says. ‘This will allow us to go for various other ways of developing the brand and means [brand extensions] are now feasible.’

The announcement comes at a time of major change within the drinks industry, particularly on-trade.

According to a recent Datamonitor report, consumers across Europe are cutting their consumption of alcohol in bars, restaurants, cafés, hotels and nightclubs. 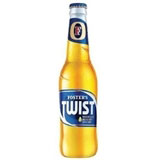 People are drinking less alcohol each time they go out and spending more on soft drinks in pubs and bars, says the report. ‘Going out is becoming less and less about drinking,’ says John Band, Datamonitor analyst and author of the report.

The report also highlights that women’s share of drinks consumption is rising: in Europe, it is predicted to grow at 1.6 per cent a year. In the UK, women will account for 38 per cent of all on-trade drinking by 2010.

According to the report, as women have stepped up their on-trade consumption, their desires have become increasingly important for major brewers.

The S&N spokesman agrees that women are a key audience for Foster’s Twist. ‘The direction of beer hasn’t been particularly female-friendly over the past few years, with the focus on pints and extra cold,’ he says. ‘[Foster’s Twist] has been designed to be more appealing to a broader audience, including women.’