The Royal Mint can produce five billion coins every year. That enormous figure includes coins for circulation as well as commemorative designs which have an eclectic focus, from a full English breakfast to the Angel of the North. The government-owned organisation dates all the way back to 886, and was originally run from the Tower of London until it moved to London’s East End at the start of the 19th century. In the 1960s, it moved to a 35-acre site in Llantrisant, Wales (about 30 minutes from Swansea) where it employs more than 900 people, and has two internal design teams. While it primarily creates coins and medals for the UK, it also exports designs to over 60 countries.

Dave Knapton has been a creative designer at the Royal Mint for eight years, working on a range of products, including the commemorative coins for Team GB at the postponed 2020 Olympics. Knapton, who studied graphic design at Kingston University, talks to Design Week about his work, including an in-depth research period and a typographic approach to currency design.

The Royal Mint advisory committee – a panel which includes art and design historians – firstly decides “what is most relevant to be represented” on a British coin. This brief is then passed onto the Royal Mint’s internal design team, made up of six full-time graphic designers (freelancers work on projects as well). Anyone can pitch for a project, depending on ongoing work. For a recent project highlighting the work of scientist Rosalind Franklin – an instrumental but often overlooked figure involved in the discovery of DNA – there was a fairly relaxed brief. The committee was keen to feature Photo 51, an X-ray diffraction image of DNA which was critical in uncovering its structure, but it was otherwise open.

Knapton submitted nine designs, and two were shortlisted. When picking projects to work on, Knapton says that different niches appeal to different designers. He is particularly interested in typography and how words can be part of coin design, meaning that the Innovation in Science series – which the Rosalind Franklin coin comes under – is a good fit for him. The royalty-based designs however might be more suited to those who specialise in heraldic design and portraiture.

As the coins usually commemorate moments in British history, Knapton likes to look for period details when starting his design process. For the Franklin coin, he looked at the kind of technology that would have been present during Franklin’s time like microscopes, as well as interesting facts about DNA. Initial sketches follow, and then Knapton works on a computer as soon as possible. The designer took a word-based route into the design for the DNA coin. Specifically, he wanted to feature Franklin’s name as a way to recognise her achievements. He quickly realised there were already two thirds of the DNA acronym at the end of Franklin’s full name. By laying her name out vertically, and adding an A to the side, Knapton hopes her legacy is represented on the commemorative coin. The design process, and its typographic result, became part of the “puzzle” of DNA. 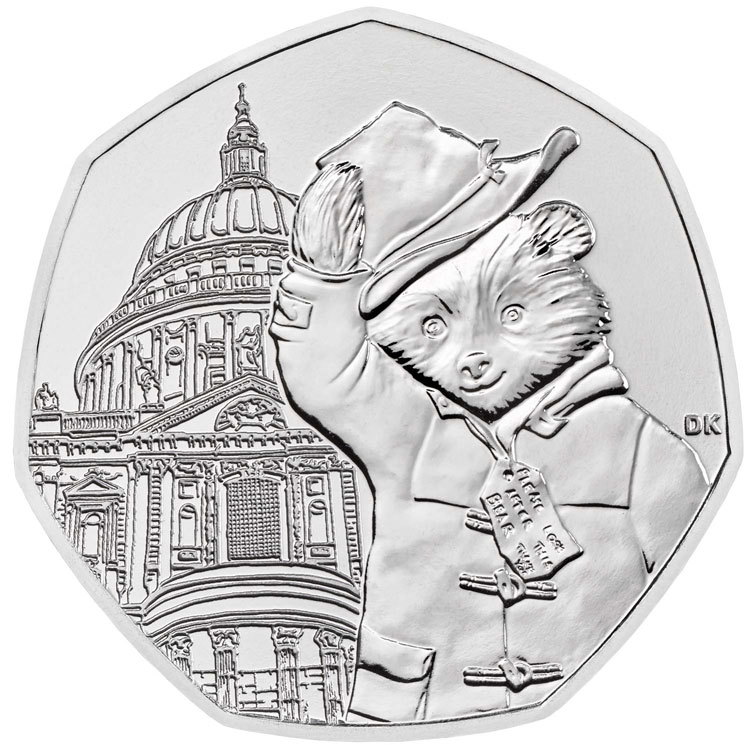 Usually the projects begin two years before a launch, and the actual coin is designed nine months before, Knapton says. Once initial designs have been done, they are sent off to an internal product design team. These designers think carefully about how the design will be applied to coins and revisions can occur at this stage as the product team consults on the design. Some details might be too refined for a finished coin, for example. Though designers work on individual projects, Knapton says that the office is collaborative (they have been working remotely during lockdown, and he misses the “spark”). There’s a wall in the office where team members will stick images, as inspiration for coins and campaigns. “Those conversations inform the way a project might be going,” he says. 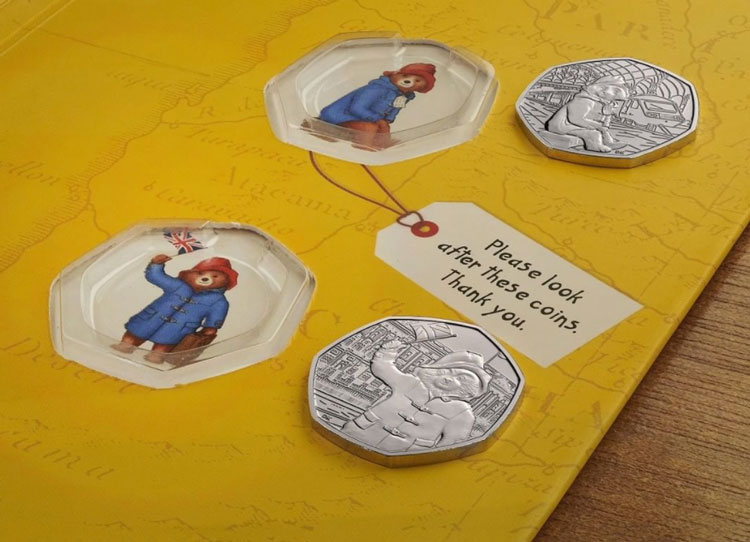 Perhaps unsurprisingly, one of the highlights is getting to see the finished product, Knapton says. This happens at the Royal Mint’s factory – which is at the site in south Wales – where trial coins are produced, in a process known as “die trials”. It’s to ensure that the die that has been created for the coin will “interpret the design in the right way”. It’s at this point, when the design has been physically realised, that Knapton is able to appreciate the longevity of the design work. “In 100 years’ time, people will still be looking at the coins,” he says. “They last forever.”

Working for a company that is over 1,000 years old also brings a certain prestige, especially when coins are designed for use in circulation. There have been five in-circulation coins created for Queen Elizabeth II since her reign began in 1952 and there is always a “real buzz” when a new design is being created. The most recent redesign was in 2015, by in-house designer Jody Clark. It was a modern update for the Royal Mint: the first portrait created using computer-aided design software.

Having travelled to the World Money Fair in Berlin earlier in the year, Knapton says there are definitive characteristics to British coin design: heraldry and portraiture have always been important, he says. But Knapton also believes that people’s perception of coin design is changing. His Rosalind Franklin work had a relatively simple aesthetic, and though people may have considered it “plain”, he believes it’s important to push design forwards. One of his favourite projects is Matthew Dent’s 2008 re-design of seven circulation coins, which show different parts of the royal coats of arms on the reverse.

The challenge is the size of the canvas; coins fit in pockets. Working for such a small space means that some details might not translate well to the coin sizes. Photographs don’t “translate” as a “direct photocopy”, for example. Bigger sizes offer more flexibility, Knapton says. The Team GB coins he worked on were for a 50p, as was a Paddington Bear collaboration. A recent set of Remembrance Day coins had a large surface area as they were a £5 coin. “It needs to have impact at arm’s distance,” Knapton says. But it also needs to work up close, as coins are collector’s items. This requires thinking about the product from different angles, and how the light reflects off the surface, the designer adds. “It gets people to look at it in more detail.”

What other aspects are there? 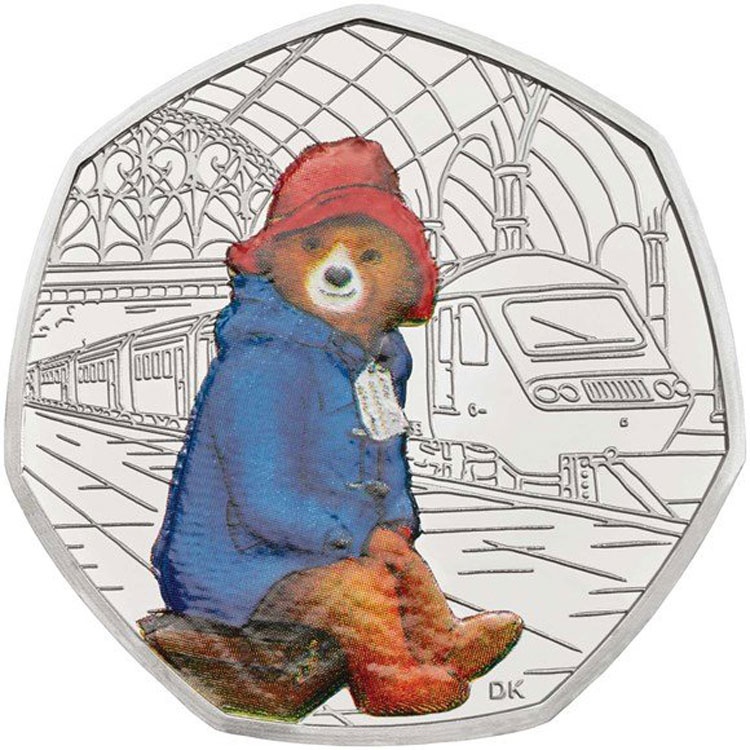 Knapton’s job does not end with the coins. In fact, he says that the most significant part of it is coming up with concepts and “stories” to sell the coins on launch. This includes packaging for the coins, and also extends to campaigns. For the Paddington coin, the launch was built around an event entitled All Change at Paddington, where giant versions of the coin were put on a rotating display at the central London train station. Knapton also worked with a copy and art team to come up with a story behind the fictional bear visiting the Royal Mint – complete with marmalade sandwiches on the office tables. This means the work is often varied; “you can be storyboarding a video for a bullion product one day, and the next creating the packaging a licensed product,” he says. “It’s juggling six products at a time on occasions,” he adds.

There has been a trend of late – kickstarted by the commemorative Team GB coins, Knapton says – where coins have featured designs inspired by popular culture. The Paddington coin is another good example of this. This has opened up a “new audience” for coin collection, he believes. There are also new phenomenon in the industry; YouTube unboxing videos and technology that add “sculptural elements” to coin design. Knapton says that he would love to collaborate with British artists on coins, as a way to celebrate different artistic styles throughout the country.

The designer also believes that people will always like the “physical quality” of coins, even with the potential of a cashless society. “As we go more digital, people will value things they can hold in their hands,” he adds. There’s also an educative aspect to the designs, as the Franklin coin shows. “Coins represent history,” he says, “and it’s important that people are still interested in them.”

You can find more of our in-house designs features, including teams such as LEGO and the BBC, here.