The vaccines came in quick succession. First there was Pfizer/BioNTech’s announcement, then Moderna and finally Oxford/AstraZeneca. Less than a month on, the UK is planning for a nationwide roll-out of the Pfizer vaccine. After becoming the first Western country to approve a Covid vaccine, health secretary Matt Hancock announced that it would be rolled out to the most vulnerable next week.

The announcement has been widely celebrated – with many viewing it as a light at the end of a long year. Some attitudes differ, however. According to a November YouGov poll, two thirds of Britons say they are likely to take the vaccine when it becomes available. Around a fifth of people say they are unlikely to. Of that group, half are waiting to see if it is safe. Only 2% of the public are opposed to vaccinations in general, according to YouGov.

Vaccines require a wide take-up to be effective. As the NHS explains, if 95% of children receive the MMR vaccine, it is possible to get rid of measles. However, if less than 90% of people are vaccinated, the infectious disease can quickly spread again. While anti-vaxxers make up a small percentage of the population, they can be vocal. And 2020 has seen a spike in conspiracy theories – including around 5G and QAnon – often aided by social media.

With such high stakes, there’s now attention on how to spread clear information about vaccines and encourage take-up. According to a Politico report, the government is gearing up for an “information war” , though details about a campaign are unknown. This week, it was reported that the NHS would be enlisting “sensible celebrities” to encourage widespread vaccine take-up.

Thompson Brand Partners creative director Chris Skelton says that any vaccination campaign from the NHS would benefit from people’s inherent trust in the brand. The Leeds-based studio was responsible for updating the NHS England identity, including a new website and set of guidelines in 2017. “As well as being one of the most recognised, it’s probably also the most trusted brand in the UK,” he adds. “To not capitalise on that trust is madness.”

The language and visuals for a campaign should be simple and straight-forward, according to Skelton. “As soon as someone sees the blue logo in the top right-hand corner and the Frutiger font, we’re well on the journey already in terms of that message being received the right away.”

While it makes sense to communicate across a range of platforms, he adds that it would be best to target the most vulnerable initially – which would likely be through television adverts or printed material.

“We can start with gentle reassurance”

Skelton advises that a campaign should avoid the “temptation to go overboard”. Designers often have to work against clients’ instincts to communicate too much information immediately, he explains. Skelton adds: “If you throw ten balls at somebody, they’ll drop them all, but if you throw one, they’ll catch it.”

That could be seen in the government’s earlier communications, which were “sometimes too complicated and sometimes not detailed enough”. And while the NHS brand is strong, Skelton warns that the past few years has seen a “massive diminishing trust across the board, especially in digital communications”. “It’s become more and more of a delicate thing to hold onto.”

Building a campaign with a long-term view would likely help bridge this moment of transition, the designer believes. Covid communications so far have been about warning, and news of vaccine is a turning point. “We can start with gentle reassurance,” he says. “It will be a big leap in people’s minds from being scared of everything to trusting the vaccine.”

Time can also provide campaigns with more precision. “As time goes on, you can get more specific about you’re targeting,” he says. It would also allow greater communication with target audiences, Skelton believes. After a first wave, people might become complacent and a campaign could become “more hard-hitting for stragglers at the end”.

He also thinks enlisting celebrites is a good idea. “People respond to other people doing things,” Skelton says. “If someone in your family, or someone you know, does something and they’re fine, you’re more likely to.” That could be useful for the more cautious group, he adds.

An element of celebration

“There could be an element to this campaign about celebrating a return to normal life, or as normal as it can be,” Thompson’s head of writing Nick Hynes says. “Britain is back to life, and that’s got to be something to feel good about.”

While this might not be part of an NHS or government campaign, he points to how brands like Carlsberg reacted to Covid earlier in lockdown. The beer brand’s campaign imagined a return to the pub after the pandemic. “It was very human and made me feel warm and fuzzy.”

As Skelton notes, it’s in brands’ best interests for people to get vaccinated. A wider vaccination take-up would likely mean a quicker return to normal for society and the economy, which would be vital for hard-hit food, drink, fashion and lifestyle brands. “They should be encouraging people to be vaccinated, even if it’s not necessarily their product.”

Understanding why some vaccines fail

Stefanie Posavec is an information designer based in London. Working with journalist Miriam Quick, she created a graphic about Japan’s uptake of the HPV vaccine in 2013/14 that’s been added to the Wellcome Collection’s Being Human exhibition this year.

“The vaccine had a bad take up originally, and we wanted to loosely map the factors,” she says. “The whole point of the graphic was to see how complicated the issues can be, and sometimes the only way to reach people is to make them understand the concerns.”

Some of the issues stemmed from public confusion about its safety, Posavec says. Another was the lack of press regulation – videos were shared on social media showing girls having seizures after taking the vaccine, for example. While she says it’s impossible to win over the core group of anti-vaxxers, Posavec says that contextualising it will be key for any vaccine campaign.

People might rightly feel nervous about taking something that has just been announced, she explains. While the Pfizer vaccine has been approved by the Medicines and Healthcare products Regulatory Agency, it was done so under emergency circumstances. “It’s useful to compare it to other timelines of other vaccines that we’re used to,” Posavec says. “The flu vaccine changes every year, and that happens quickly.”

A focus on “plain English” will also be key, the designer says. That’s not just for any campaign but also for annotations and labelling of graphs and data that are shared. “We’re all understanding data and charts more – a year ago, not many of us would have known what an R number was – but it can be overwhelming,” she adds.

Posavec previously worked with Pentagram New York partner Giorgia Lupi on year-long project Dear Data where the two designers would write each other postcards every week. The infographics conveyed different topics close to them, such as smartphone addiction or charting a week of compliments.

The project spoke to a more intimate form of graphic communication, reminiscent of an early lock-down project where postcards were sent to vulnerable people with information about food shopping. “Tailoring communication to people’s personal situation makes it easier,” she adds. “If it’s on Twitter, it can be communicated in 30 seconds, while a broadsheet newspaper on the weekend can go into more depth.”

Posavec draws attention to the the GOV.uk dashboard, which was recently updated so that people can type in their post code and see what is happening in their area with regards to coronavirus. She also praises the GOV.uk website’s “civic aesthetic”, designed by Ben Terrett. “It feels like I’m going to get what I need done and people know what they’re doing.”

The role of digital in a vaccination campaign

This year has seen the rise of contact tracing apps, first originating in Singapore. In the UK, there has been a sometimes-controversial rolling out of this technology amid privacy concerns and the design of the app itself. But in its first day of release 6m people downloaded the app, and by the end of September this figure increased to over 10m in England and Wales.

Adrian Westaway, co-founder of London design studio Special Projects, recently launched a speculative project about how the contact tracing apps could have been improved through more human-centric design. Could digital be part of the vaccination campaign? “Yes, but it would have to be integrated into the existing app, as it’s already hard enough to get people to download one app,” he tells Design Week.

There’s a real opportunity for a digital companion to be useful in the vaccination campaign, he says. Westaway mentions the effectiveness of the Zoe app, a daily symptom checker run by King’s College London. It keeps in touch with users through updates like new R number modelling. Because of the authority behind it, the app also establishes trust with users over a period of months, Westaway says.

He points out that there are many steps in the vaccination process: from the regulation stage, to shipping and storage, to individual use. This could be a “fantastic” opportunity for an app, he believes. It could be particularly powerful in guiding people through the process – “if you’re feeling nervous the night before or if you feel funny afterwards.”

“You also really want people to come back for the second jab,” Westaway adds. An app could provide a vital reminder for people who might forget or feel apprehensive. 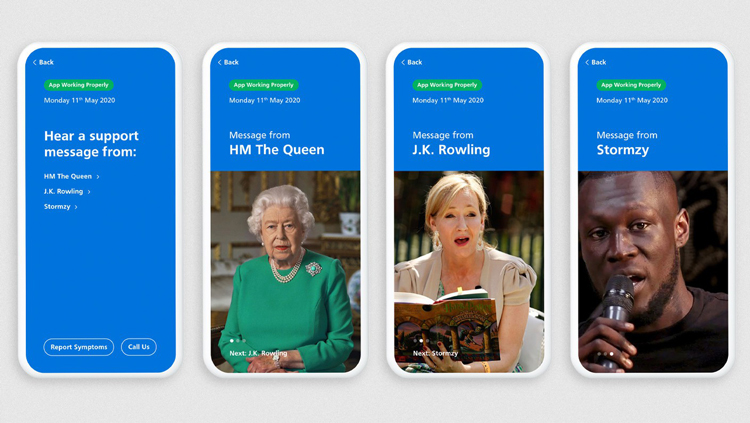 The studio’s self-initiated project incorporated many principles that still seem relevant. It advised that the language should be about a collaborative effort, for example. The studio also added the idea of support messages from public figures, like the Queen and Stormzy. These “moments of delight” could add a sense of magic to the app, Westaway says.

Ultimately, an app’s power might be in its intimacy. “It lives on a private place on your phone and you interact with it with you own terms,” he says. People might feel more comfortable with asking questions there and it’s likely to be calmer than the misinformation that spreads on social media.

He likens this balance to the younger wave of banking platforms like Monzo and Starling which showed how designers could be “playful within a secure realm”. “Finding that balance is really important,” he adds, “because the opponent of this information is really hard to beat.”