“I was tired of seeing snowflakes and foreign greetings in the Caribbean,” Ayrïd Chandler tells Design Week. “Christmas is the sunniest, hottest day of the year here – there’s a beautiful golden light everywhere.”

The Trinidad-based graphic designer was creating a line of Christmas cards in 2016 when she decided to put a more accurate spin on them. One design from the year reads: “Baby, it’s hot outside”. Since then, the designer has gone onto create more festive cards with a more appropriate “Trini Christmas” themes. The most recent set include lines from traditional songs. Another has the ingredients for a traditional Christmas meal (which includes bread, ham and ginger beer).

These festive details may be small, but they are part of a bigger design picture in Trinidad. The dual island nation is the southernmost Caribbean nation, off the coast of Venezuela in South America. The two islands have a long history of colonisation; Trinidad was ruled by the Spanish Empire in the 15th century and then the British in the late 1700s while Tobago has had the most colonial changeovers out of any other Caribbean island.

This legacy has left a mix of cultural influences on Trinidad and Tobago and created a society that prioritises Western design ideals, according to Chandler. She studied design at Savannah College of Art in Georgia, US, and she credits her time away with broadening her horizons and approach to work.

When she returned to Port of Spain, Trinidad’s capital, she had a “New York design school” mindset – “clean, simple, less is more aesthetic”. “That is not Trinidad at all,” Chandler says. “Trinidad is loud, colourful and busy.” She proceeded to blend the two, playing with a bright colour palette and a more formal grid style.

One of the best examples of this mix is an identity she created for the country’s widely-celebrated and internationally-famous carnival, held before the start of Lent. Chandler was responsible for the central Red Cross Children’s Carnival event which takes place at the children’s version, Kiddie Carnival. The parade crosses through the Queen’s Park Savannah – the largest roundabout in the world.

Chandler looked to the costumes of Trinidadian Carnival characters and incorporated them into the identity. The wordmark, for example, features brightly-hued mix-and-match patterns which can be seen in the “Bèlè dancer” costumes. While Chandler’s design work is varied – from film festivals and catering companies to album artwork – the tendency to mix her minimalist style with her native country’s more maximalist inclinations can be seen throughout.

“Design has not always been valued highly in Trinidad” 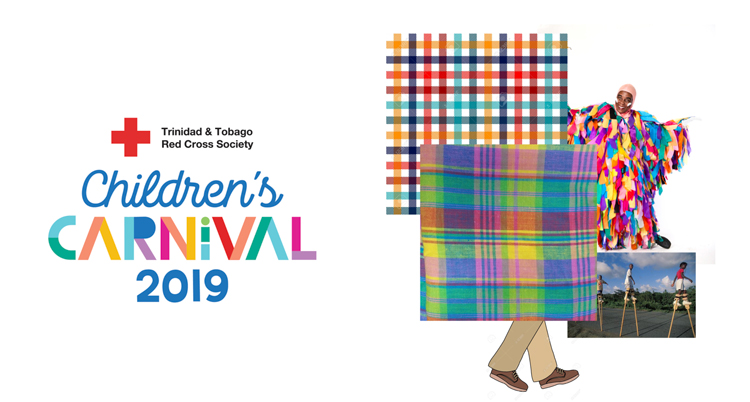 “Design has not always been valued highly in Trinidad,” Chandler says. While she was at school, more traditional pathways like business and law were encouraged. Even now, she says that there is a wave of companies offering cheap identities to meet the demand for logos and branding. She adds that salaries in the creative industries have not risen according to inflation. In fact her wages now are not much greater than those earned by her father when he worked in advertising in the 1980s.

Chandler would like a formal design organisation as a way for designers to come together. But another hangover from colonial days is that there’s a widespread lack of trust among the population. There is a culture of “don’t tell people your business, because they’ll steal it from you,” she says. “Anyone that’s been ruled and owned by people is very conscious of anything new or different or strange.”

This has had an effect on the design scene, which remains disconnected despite being quite small (Trinidad and Tobago has a population of around 1.4m). Chandler says there’s a central, small circle of creatives and a much wider group and these these two do not interact – creating a lot of silos within the industry.

In an attempt to remedy this, she co-founded Design Objective. “We’ve thought for some time now that local designers need better representation, access to helpful resources, and a collective voice to educate the public and encourage a better state of design in Trinidad and Tobago,” the co-founders say.

Yet Chandler says that it was a “struggle” to drive interest. “We’re just not talking to each other for some reason,” she adds. “It’s hard to 1) find them and 2) have a conversation while being open.” While the organisation has created social campaigns and attempted to reach schools, it has often hit a wall, Chandler says. One break-through has been on Twitter – which Chandler calls “TriniTwitter” – where she’s met and talked with local designers, exchanging tips and memes.

Design Objective’s co-founder Agyei Archer tells Design Week that 2020 has changed how he views his role as a designer. Archer has a multi-disciplinary background, working first in software development before branching into identity design and then typography. Next year, he is speaking (virtually) at London’s St Bride Library as part of its 125th birthday celebrations. He’s also set up his own branding studio.

This year, he turned his attention his own start-up, Unqueue. It’s an ecommerce platform that allows businesses to set up an online retail space without having to commit to a designated website developer. “It’s just because Covid has made things so hard and it’s sometimes too expensive for a business to pay a single developer,” Archer says. “And I just felt that because we had a good year, we can afford to help people for a bit.”

Now there are 110 businesses signed up to it, all based in Trinidad. He plans to expand into the Caribbean in the future. “I’ve changed the way I look at design as a practice,” Archer says. “Where I look at where we are in the world, it feels less urgent to make nice things for rich people than to be able to help small businesses stay afloat.”

“We’re developing a people who appreciate the whole picture”

“I think I’ve helped more businesses get online in the past six months than I have in the past ten years of my career,” Archer adds. Helping people “at scale” though useable UX might be needed in Trinidad. Thanks to its natural resources of oil and gas, it is the richest of the Caribbean islands and has long relied on these industries. Julie Harris, a lecturer at the College of Science, Technology and Applied Arts Trinidad and Tobago (COSTATT) says design now presents an opportunity to “diversify the economy”.

One challenge is Trinidad’s design education, which Harris, Archer and Chandler all say can be too focused on skill-learning rather than design thinking. Archer says it was former graphic artist and University of Trinidad and Tobago lecturer Elizabeth French who taught him about the wider design landscape, but that she was an exception. Earlier this year, Chandler began lecturing at University of West Indies, where she sought to impart the lessons she’s learned abroad to Trinidad’s home-grown university students.

Harris, also a director at Port of Spain’s Lonsdale Saatchi & Saatchi, helped to establish COSTATT’s graphic design and communications degree eight years ago. The course brings together technical skills, design principles and industry insight. It was designed to give students a “360 degree approach”, Harris says. “We’re developing a category of people who appreciate the whole picture,” she adds.

Like Chandler, Jamaica-born Harris also believes that the country’s lack of openness is an issue. “When I came here, I found the lack of interaction odd,” she says. “I have a lot more interaction because I came from a culture where it’s normal.” Another aim for her teaching then is to to instil “cross-fertilisation” in her students. One solution is group critique, where students give each other feedback on projects. “It’s how you create the best work.”

Developing students in this way will lead to a more confident and original design culture in Trinidad, Harris hopes. “There’s a tendency to look at international design and instead of trying to create a Caribbean aesthetic – something that is unique and iconic – they try to look like that,” she says. It’s “global design lite,” Harris adds.

In October, Harris was appointed president of the Advertising Agencies Association of Trinidad and Tobago (AAATT), an organisation akin to D&AD. The ongoing issue for AAATT is “relevance”. Harris asks: “How do we get people to look at us as the authority on all things communication and design?”

In the long term, she’s hoping to create a “design ecosystem” that can act as a meeting point for the creative and business industries while also nurturing emerging talent. AAATT currently works with universities to support design students and link them up with studios, but she also hopes to set up a more formal network for professional resources and a series of “creative challenges” to inspire young designers.

This could help both at a national and international level, and the latter is a focus for Harris. While she says that there’s currently not a Trinidadian aesthetic in the same way that there’s a French, British or Japanese one, there’s huge potential to create one.

She points to the work of Trinidadian set designer Peter Minshall who first starting working at the country’s carnival before moving onto designing sets for the Olympic Games in both Barcelona (1992) and Atlanta (1996) and also the 1994 Football World Cup. “He did things in a way that had not been done before,” she says. “He brought his own aesthetic – he brought a Carribean aesthetic.”

“We can do that again,” Harris adds. “By just having confidence in our work and ideas.”