The logo for South Korea’s winter games was revealed in 2013, and created by Korean designer Ha Jong-joo. It uses the five ubiquitous colours that are associated with all Olympic festivities of blue, yellow, green, red and black. But it turns the logo on its head by scrapping the well-known Olympic rings and adding a Korean twist.

The pillar- and star-shaped emblems that make up the logo represent different characters – or letters – used in the Korean alphabet, Hangeul. These letters are used in the word PyeongChang, but also have a deeper meaning. The pillar-shaped symbol aims to represent “harmony” between “heaven, earth and man”, say the Olympic organisers, while the star-shaped symbol aims to represent athletes, ice and snow, presumably through its resemblance to a stick-man figure and a snowflake.

The Paralympic Games logo drops the pillar symbol, and instead features two star-shaped emblems holding hands, which implies it is representing unity between athletes.

A series of pictograms has also been developed to be used across the different winter sports, from figure skating to bobsleigh and snowboarding. They all incorporate abstract, white, human figures, made of lines and dots which are also inspired by the Korean alphabet, and set against a blue background. 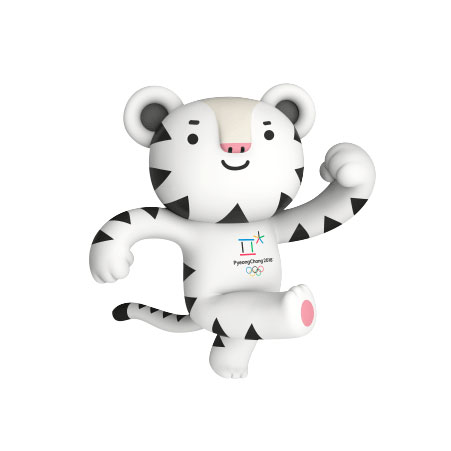 Korea has a history of creating cute, animated characters, particularly bug-eyed, big-headed, colourful animals. This carries through to the mascots for this year’s Olympics, which are cuddly, animated depictions of a white tiger and an Asian black bear.

The white tiger, called Soohorang, is considered to be Korea’s national – or “guardian” – animal, according to the organisers. The name comes from two words meaning “protection” and “tiger”.

The black bear, called Bandabi, symbolises “strong willpower” and “courage” in Korean folklore. Both creatures can be found used across communications, undertaking various high-risk winter sports, from skiing to curling. 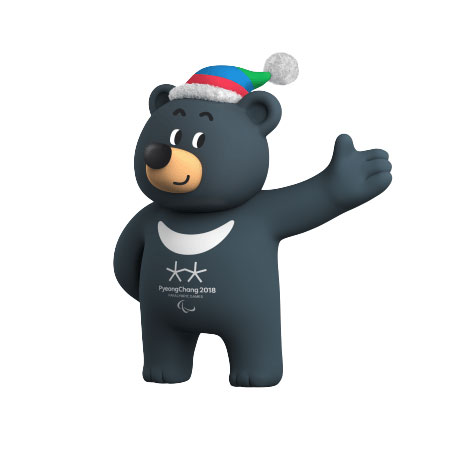 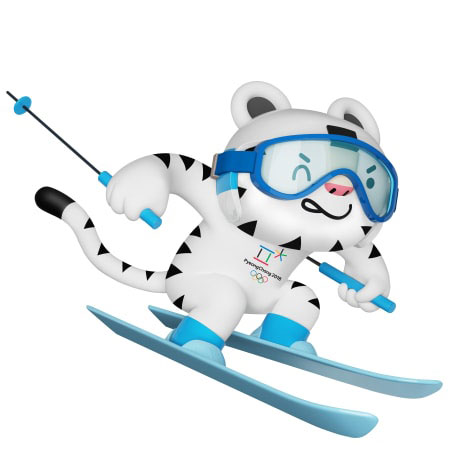 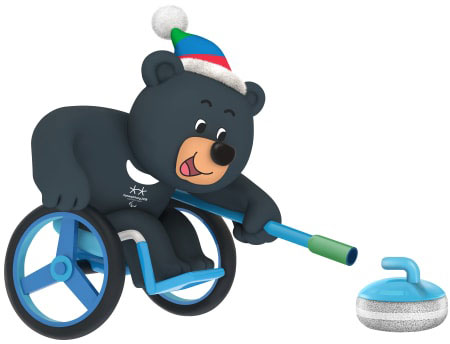 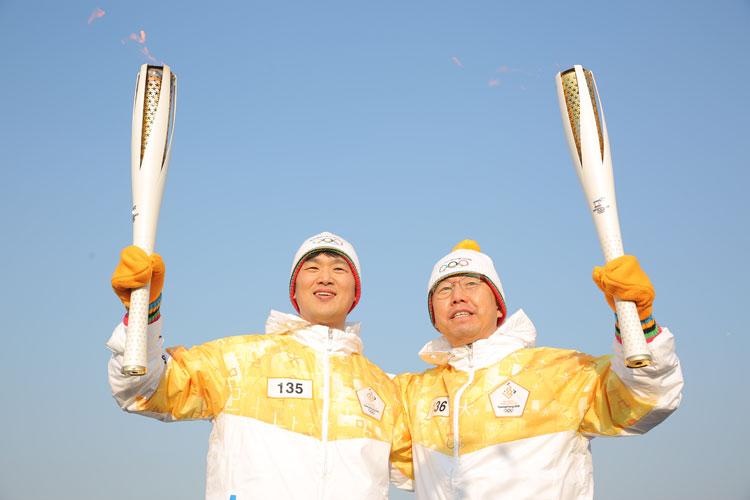 The Olympic torch also references the heritage and culture of Korea – the torch is 70cm in height, symbolising the altitude of PyeongChang, which sits 700 metres above sea-level.

Designed by Korean industrial designer Kim Young-se, it features an outer, white case with an inner gold cylinder, which carries the frame. The white casing features five prongs, representing the star-shaped, Korean letter used in the logo, and also aims to symbolise five continents coming together.

This star symbol is repeated along the handle of the torch, which means people are “coming together” to do the torch relay, say the organisers.

An umbrella-shaped cap sits on top, which enables it to keep its flame burning even in strong wind and heavy snow, say the organisers. The white colour of the torch aims to represent the impending cold weather, as well as nod to the white porcelain produced in Korea.

The winning medals were inspired (again) by Korean language, architecture and textiles; the alphabet Hangeul, alongside traditional housing (Hanok) and clothing material (Hanbok).

The medal itself features indented stripes across the metal, which are stretched out versions of Hangeul letterforms, while a Korean fabric called Gapsa has been used for the strap. The strap is also covered in Hangeul letters, forming a snowflake shape. The wooden case for the medal lends its shape to the curved rooves of traditional Korean houses. 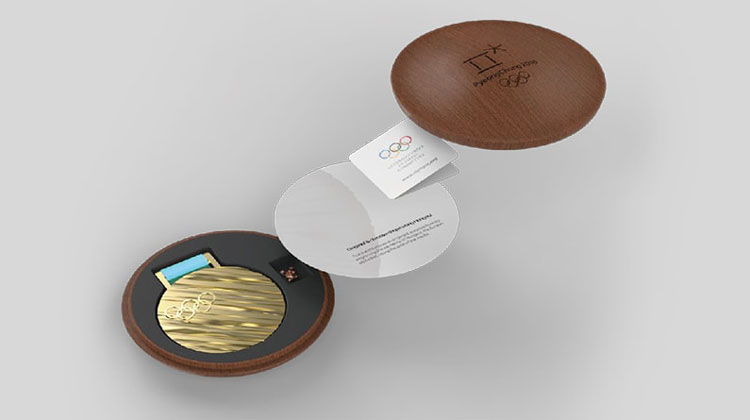 The PyeongChang Olympic Stadium has caused some controversy over the fact that, after a three-year-long building project, it will allegedly be demolished once the games are over.

The stadium was constructed between 2014 and 2017, and is due to be dismantled after the closing ceremony takes place on 25 February. It cost £44.1 million to build, according to the BBC.

It’s not just the unsustainable nature of the stadium that has raised eyebrows, either – concerns have been expressed about the fact that it has no roof and allegedly no central heating, so spectators are expected to feel the cold quite substantially when the extreme weather conditions kick in.

The Olympic organisers are anticipating this and intend to give everyone attending the ceremony heating pads, blankets, warm seat cushions and raincoats, while heat shelters, heaters and windshields have been installed throughout the stadium.

Pentagonal in design, the architecture seems to reference the five-pointed star that makes its way throughout all of the Olympic design and communications. It is expected to seat 35,000 people.

Another gargantuan, architectural statement of the games will be London-based practice Asif Khan’s installation; a “super-black” pavilion, the outside of which is illuminated by fake stars that appear to “float in mid-air”, says the architectural practice.

The 10-metre-high structure is covered in a material called Vantablack, which absorbs 99% of light that hits its surface, creating the illusion of a “black void” in daylight. Visitors can stroll into the installation, and will be greeted by a water installation, which creates water droplets in the air. It was commissioned by car brand Hyundai.

The torch-bearers are the stars of this year’s games when it comes to apparel; the gold and white jumpsuits worn by those carrying the Olympic torch, along with matching hat and gloves, mimic the design of the torch itself, and feature the much-seen star-shaped emblem. The material used is waterproof and thermal, to keep torchbearers warm, say the organisers.

A multi-coloured palette graces the sports uniforms, from red and blue for cross-country skiing, to the neon, multicoloured jumpsuits of the skeleton athletes.

All images courtesy of the PyeongChang 2018 Olympic and Paralympic Games unless otherwise stated.