Pentagram partner Yuri Suzuki has designed an online music creation platform which recreates the techniques and sounds of a cult drum machine and synthesizer by electronic music company Roland.

808303.studio is a collaboration between Pentagram, Roland, Counterpoint Studio and the Design Museum, which is currently hosting an exhibition on electronic music.

How does the platform work? 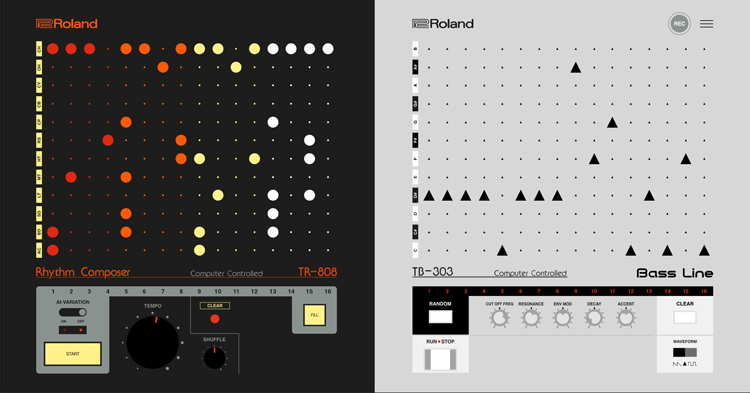 The platform uses Roland’s “step sequencer” technique and recreates the interface and sound of  of the TR-808 drum machine and TB-303 bass synthesiser. Both these instruments are on display at Electronic: From Kraftwerk to The Chemical Brothers.

The “step sequencer” uses rows and columns to dictate rhythmic values, note names and octaves among other musical qualities. The tempo and time signaure is decided by the rate at which you progress.

808303.studio emulates the sound of the drum machine and the bass synthesiser. People can set, record and share their own tracks on the platform.

These instruments changed the creation of electronic music, Suzuki tells Design Week, not just because of their sound but also the way they allowed people to create music in the first place.

They were relatively cheap when they were first launched, he says, which meant that the sounds could be created more “instantly” and the world of music production was opened up to people from less wealthy backgrounds.

They also managed to launch electronic musicians into the world of “big pop” and make 808 sounds mainstream. The sound is still everywhere nowadays, Suzuki explains. “Artists like Travis Scott and Drake are using 808 sounds because they grew up with it,” he adds.

An online platform also means that there is no need to buy additional hardware or software. Suzuki is especially excited about the social side of the platform. “You can create quick music and then share it online,” the designer says.

“What’s happening right now in the music industry is that almost 90% of distribution is happening in the digital world,” Suzuki says. “You used to have to press a record and send it over to record shops.”

This project is all about “quickly sharing with your friends”, he says. This has especial relevance during lockdown, the designer believes. “It makes sense to share on social media during a lockdown – it’s a much easier way to communicate with other people.”

Acid house DJ A Guy Called Gerald has helped create an instructional video to teach people how to use the platform.

The platform has been designed with accessibility in mind, Suzuki says. One of the “biggest mistakes” you can make with interfaces is overcomplicating them, he adds.

808303.studio keeps things relatively simple so that people of any age and musical ability can produce a track that sounds good, according to the designer.

“It’s targeting people who have never played an instrument before,” he says. “I wanted to show people how easy it was to make electronic music.”

People can be “scared” of musical instruments and he wanted the platform to appear approachable. That people will be able to experiment with them in their own homes will likely help, Suzuki says.

He trialled the platform with friends and says that children particularly enjoyed it, which he attributes to the younger generation growing up in a digital universe.

While it is accessible and simple, Suzuki says that the sound quality was important. Compared to a similar platform Google Chrome Music Lab, the sound is much better, according to Suzuki. There’s also the opportunity to produce more complex music tracks with 808303.studio.

Suzuki believes that lockdown has created unexpected creativity – learning an instrument and experimenting with sounds is something people can do easily at home. “Music-making is quite suited to the time we’re living in,” he says.

Suzuki has been busy during the pandemic. Earlier in lockdown he announced a project in collaboration with the Dallas Museum of Art that documented the sounds of the pandemic. Sound of the Earth: Chapter 2 is an online archive that crowdsourced sounds from people around the world during the time in lockdown.

He also revealed the Easy Record Maker, a machine that lets people press their own vinyl records at home and then instantly play them back. Suzuki worked with Japanese publishing and toy company Gakken on the project which he hopes will be released in Europe before Christmas.