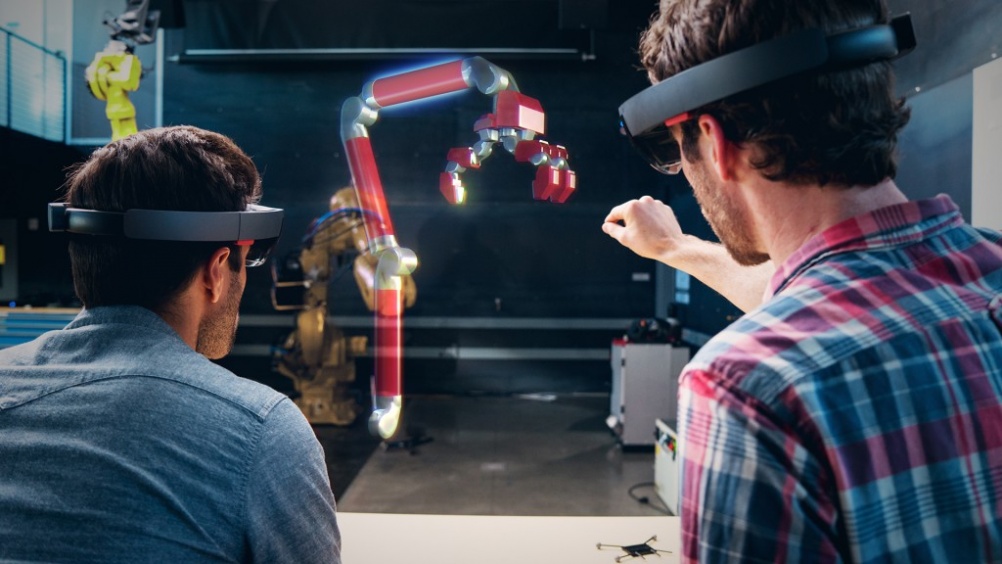 A new development in virtual reality could change the way product designers work by enabling them to create physical objects out of holograms in the air.

A collaboration between Microsoft’s hologram headset HoloLens and design software Autodesk Fusion 360 means that designers will be able to design 3D products by working on full size holograms.

Possibilities for the “every day designer”

The project fuses elements of virtual and augmented reality, creating a virtual image of a real life object in a real-world environment.

The project began last year, where both companies wanted to explore “what could be possible for the every day designer or engineer using HoloLens”, says Garin Gardiner at Autodesk.

This will help to reduce the time it takes to make products, and will reduce the number of physical prototypes made, says Ben Sugden, studio manager at Microsoft HoloLens. It aims to improve the way designers, mechanical engineers and product developers work together.

The HoloLens headset allows wearers to view imagery in 3D at “high-definition and true size and scale…with the ability to move freely around it”, Sugden says.

While digital designers often use virtual reality to create immersive experiences for consumers, such as the recent wonder.land exhibition seen at the National Theatre and the recent Oculus Rift consumer launch, this exploration of the technology is aimed at helping designers in their every day working lives.

What do digital designers think?

Opinions are mixed on the potential of holographic 3D design – while digital designers agree that the programs will speed up design processes, others think there could be repercussions, or that the design community should not get ahead of themselves with the mainstream use of this technology.

“No longer constrained by barriers of the physical world”

Amelia Kallman, innovation executive at consultancy Engage Works, which hosts a technology innovation lounge called Flux in its studio, says: “New innovations in virtual reality and augmented reality…not only have the potential to speed up processes, collaboration and prototyping while saving time and money, but could also inspire completely new art forms…that haven’t yet been imagined.”

She adds: “The HoloLens partnership with Fusion 360 shows that whether it’s virtual reality or augmented reality, or some new disrupter yet to emerge, we are looking at a future that is no longer constrained by the barriers of the physical world.”

Nicolas Roope, founder at consultancy Poke, which creates interactive experiences such as for this year’s Game of Thrones exhibition, says that while advancement of technology means VR and AR will be used more widely, it could also lead to deskilling and the loss of traditional crafts skills.

“As we’ve seen from many other pervasive technologies, the more real and intuitive representation becomes, the more accessible their use,” he says. “It used to take weeks and weeks to attain the use of Photoshop as a skill – now my two-year-old can pick up a new iPad app and use it instantly.

“As tools and technology make design processes more real and intuitive, we will see the same consequence, with many repercussions for brands and professional design industries,” he says.

Design practice “associated with the screen”

While the transition from working on screen to the physical world could revolutionise the product design sector in the long-run, other digital designers are wary about jumping to this conclusion in the short-term.

Scott Fletcher, director at consultancy Play Nicely, which recently completed virtual reality work for the National Theatre’s wonder.land exhibition, says: “For any 3D designer, being able to preview and then edit work in its real-world environment is a huge advantage as it makes it easier to create a final product that is alluring and relevant to its intended audience.

“But there is such a history of design practice associated with the screen, that it will take time for the HoloLens to become more than an early preview system for content created through other means.

“With time this will change, but only if the hardware improves – there is currently a restricted viewing area for 3D content within the HoloLens viewfinder – and if the software relationship grows with it,” he says.

HoloLens trial pack to roll out next year

A launch date for the HoloLens is yet to be announced. Developers and designers based in the U.S. and Canada can currently apply to buy an early development edition of the headset for $3,000 (£1,972), and can expect to receive it by March 2016.