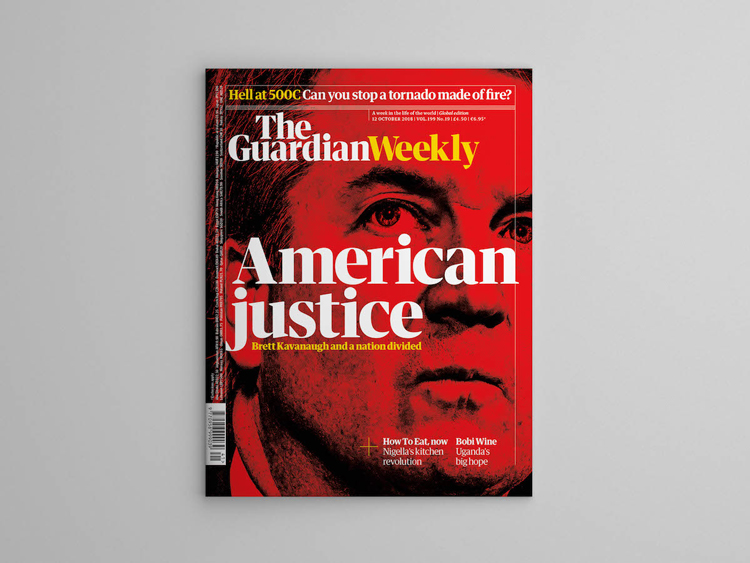 The Guardian Weekly has been redesigned in a bid to change its format from newspaper to magazine, and better highlight it as a “global” publication.

The weekly newspaper started off in 1919, launched by then editor CP Scott, where it was meant to showcase the best from The Guardian each week. It was sold globally, and before the newspaper launched its first website in the 1990s, it was the only way readers outside of the UK and Ireland could read The Guardian.

It includes a mix of stories taken from the Guardian’s UK paper, its Sunday newspaper the Observer, the website, and the digital editions based in Australia and the US. It aims to cover global, rather than UK-focused, news.

Up until now, it has been produced as a half-berliner-sized newspaper, and sold via subscriptions. It has now become a glossy news magazine, similar in format to magazines such as The Week and The Economist, and will be sold on news-stands around the world as well as through subscription.

It will now be produced as three tailored editions, for Australia, North America, and a “global edition” for the UK and the rest of the world, says The Guardian.

It has a £4.50 cover price, and will be sold on news-stands separately from the daily Guardian newspaper.

It will continue to be a curation of articles taken from other Guardian papers and the website. There will be no additional content in the magazine, with all its articles available online.

A new editorial content structure has been implemented, which centres around four main sections: News, Spotlight, Culture and Opinion. 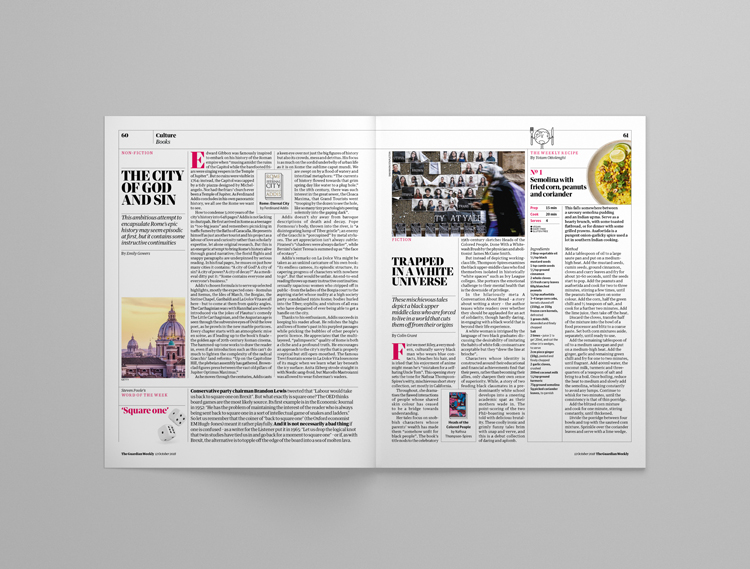 The front quarter of the magazine, News, features UK and global news round-ups, with the Australia and North America editions of the magazine featuring four pages of localised content in this section.

The second quarter, Spotlight, features in-depth news features on big stories, with more analysis and explainer-type pieces. This also includes news on science and the environment.

The third section, Opinion, includes comment pieces from “distinctive Guardian voices” as well as newcomers, while the final section, Culture, includes features and reviews on things such books, food and film.

Guardian Weekly, which has been edited by Will Dean since December 2017, aims to “give another life to the journalism that [The Guardian] has invested in”, he says, and provide a printed curation of “the best” from The Guardian’s website.

With the new Spotlight section, the redesigned magazine looks to place an emphasis on the “importance of [The Guardian’s] depth and length of journalism”, he adds.

“It made more sense to start trying it as a magazine, as a complement to the print newspaper on the news-stand,” he says. “Traditionally Guardian Weekly was aimed at an older audience, but we want the magazine to also be for young adults who are used to reading online, but who want to have a relationship with print. This is for someone who wants to sit down on a comfy chair, away from the noise of the internet, who might like reading other news magazines.”

The redesign has been led by The Guardian’s in-house design team, and follows the redesign of the printed Guardian daily newspaper and website earlier this year. 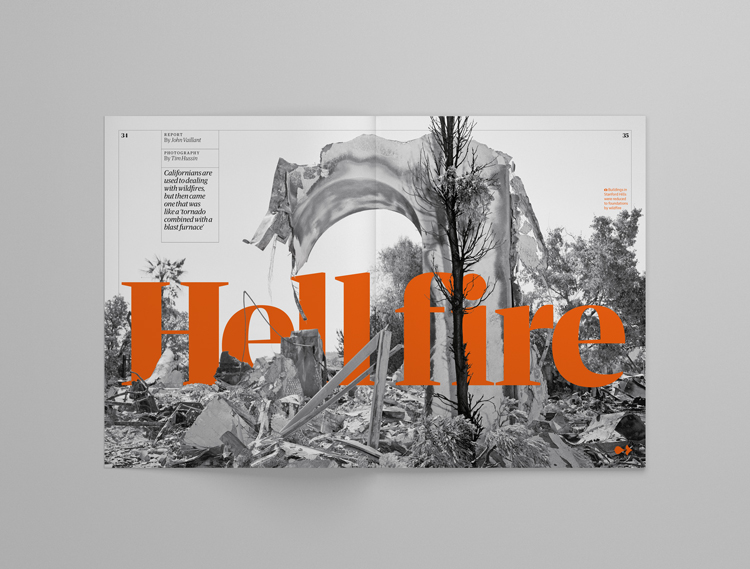 Chris Clarke, design director on the project, says the challenge was in retaining a “newspaper sensibility” while adding the “wit” of a magazine, to strike a balance between the two. The design had to be relatively simple and structured, to allow features and breaking news to be added into the magazine quickly, he adds.

“We’ve used a horizontal, modular grid for the print design,” he says. “We need a structured, newspaper sensibility with columns, to keep the pace up [for new stories to be added in]. But we’ve also added more graphics [and illustrations] to add the wit of a magazine and tone.”

The masthead has also been left-aligned on the front cover of the magazine, in a bid to make it more visible when stacked up on news-stands, and the previous typeface Display Condensed has been dropped for Guardian Headline, which was also used in the daily paper and Guardian website redesign in January this year. 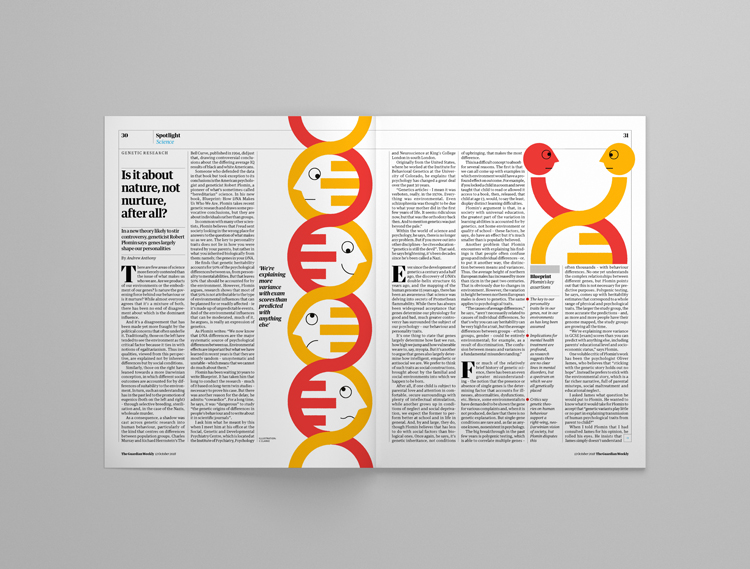 Clarke adds that the new-look magazine has been inspired by the world of “independent or niche” publishing and “slow journalism”, such as quarterly news magazine Delayed Gratification, and will aim to have “bold covers” while retaining a “structure” to enable it to respond quickly to news.

The Guardian Weekly will be available through news-stands globally but the majority of sales are expected to come from subscriptions, says Mylene Sylvestre, director of publishing at The Guardian. While the cover price is £4.50, customers save up to 30% by subscribing.

“News weeklies are doing really well at the moment, and The Guardian Weekly already has a loyal base,” says Sylvestre. “This is an evolution of the previous newspaper, and looks to create a haven and calmness in the deluge of news [that people are subjected to today].” 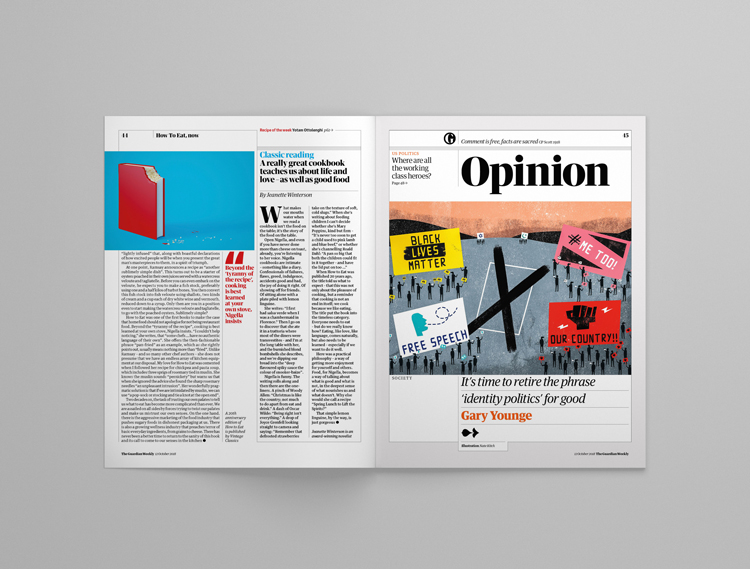 While the magazine uses stories from the website and print Guardian editions, the new Guardian Weekly aims to be a curation of the best from all of these sources, says Dean, to “capture the joy of print”.

“If you wanted to find an article for free, you could do that very easily online, and that’s the great thing about The Guardian,” says Dean. “This is about bringing stories to people that they may have missed, because the front homepage changes so regularly, and presenting stories in another way.” 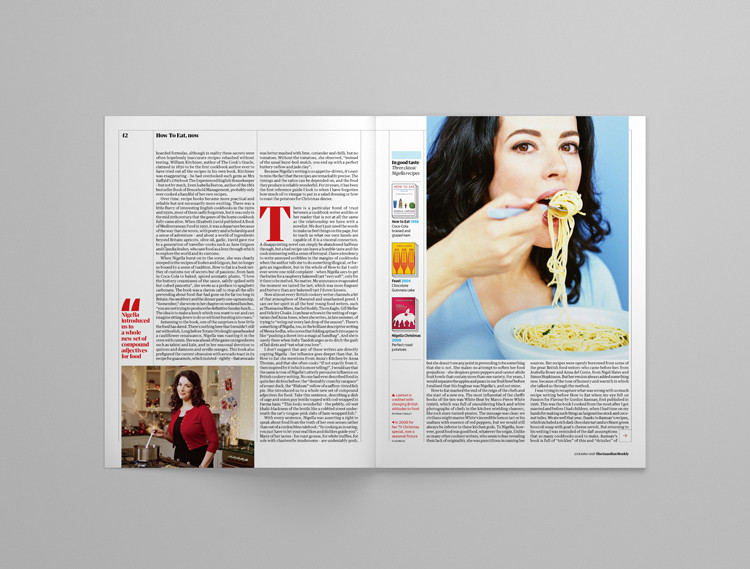 In terms of choosing what stories go into the weekly magazine, Dean says this is a tricky task but it will include a mix of big and global stories, stories that aren’t being told in the same way elsewhere or are exclusive, and ones that are in-depth.

“We want this to be a global publication — not a British publication for British people around the world,” he says.

The first copy of the new Guardian Weekly launches on news-stands and will arrive with current subscribers on 11 October 2018. It leads on a Spotlight, in-depth article on Brett Kavanaugh, who has now been confirmed as a member of the US Supreme Court, despite allegations of sexual assault surrounding him.

The issue features a red and black cover of an image of his face, accompanied by the masthead and coverlines in white and yellow. 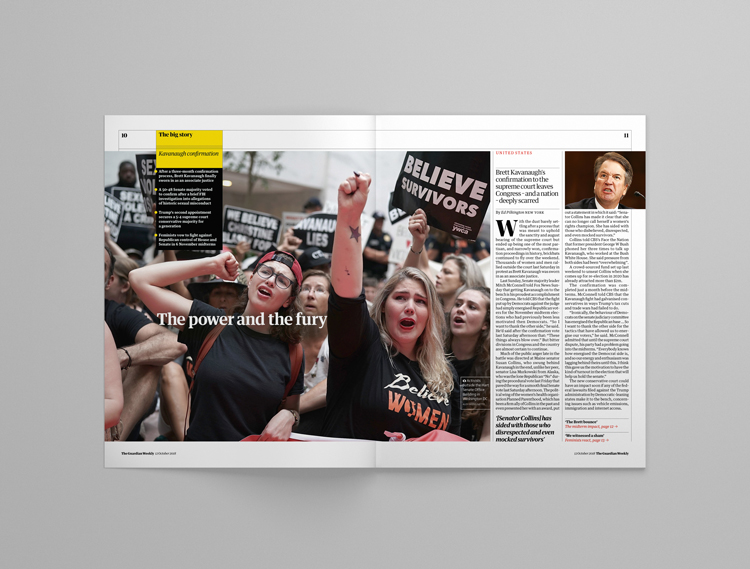 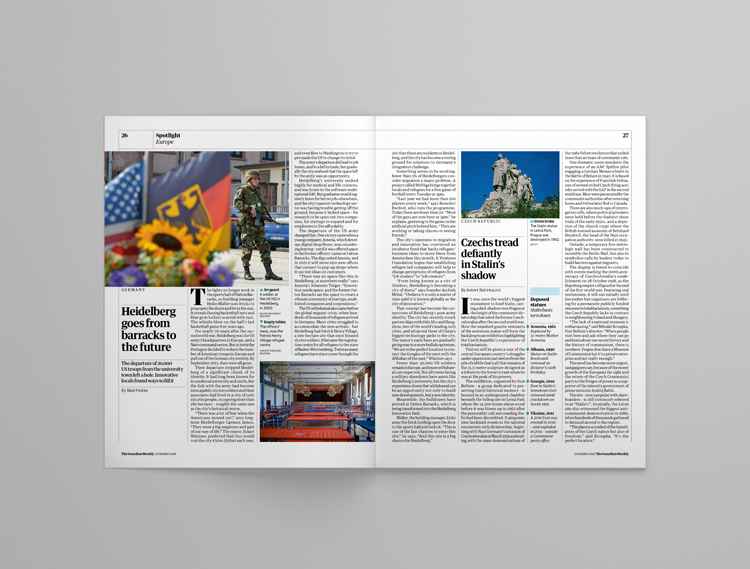 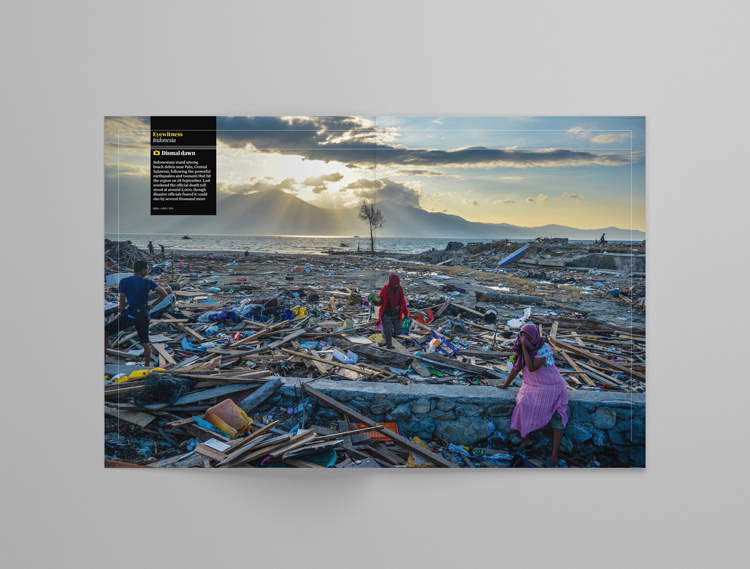