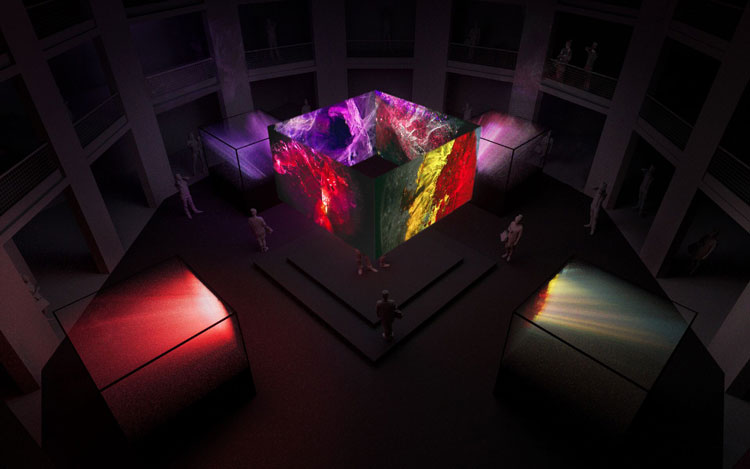 At Collins Music Hall in Islington, creative studio The Experience Machine has worked with installation photographer Dan Tobin Smith to create an installation which plays with concepts of spatial design and sensory experience. Imagery is based on Smith’s photographs of precious gems. In the darkened venue, visitors will be guided through a series of large-scale projections which showcase the “expanded space inside gemstones” in an attempt to “blur boundaries between nature and design”.

With Void, The Experience Machine — which has previously worked with Selfridges on Music Matters a campaign about London’s nightlife — explores containment and scale, and how sound and vision can affect user experience. Two special events, featuring a live performance by female electronic drone choir NYX, take place on Sunday 15 September and Wednesday 19 September.

The structure is a 2-metre diameter ring, made up of bamboo and carbon fibre as a way to look backwards and forwards; to Kuma’s childhood memories but also at the future of architecture. Kuma will also be giving a keynote speech for the festival on 14 September. 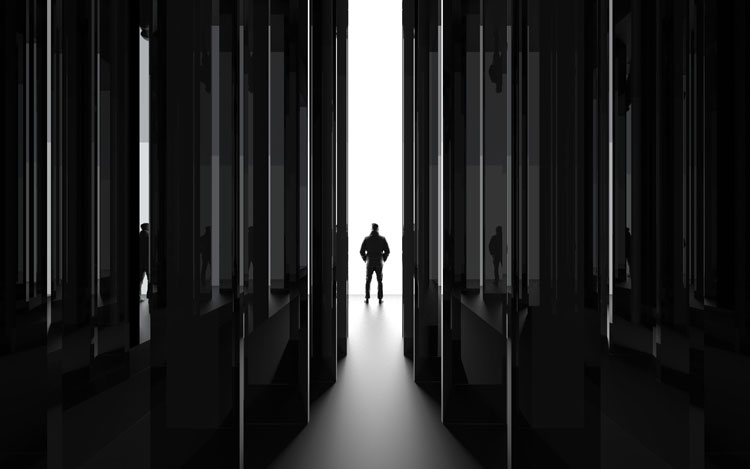 Canadian designer Matthew McCormick is also focusing on sustainability — a ubiquitous theme of this year’s festival — but in a more confrontational way. Playing with ideas of space and light and dark, Avalanche — which McCormick calls a “poetic metaphor” — seeks to confront viewers with their “own mortality” against the backdrop of the climate crisis. Groups of visitors will be able to make their way through the low-lit, reflective space where they are then “urged to pause in a heightened sense of consciousness”. 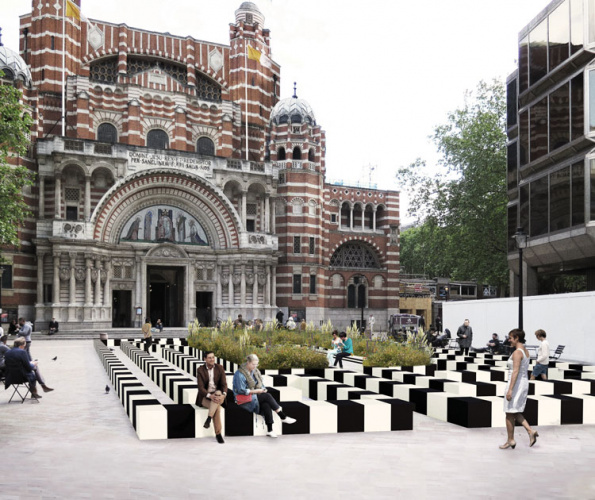 Patternity, the London-based design studio that specialises in patterns, has created a black and white three-dimensional labyrinth which hints at the possibility and position of wellbeing in urban design. Unlike McCormick’s Avalanche, the design of Life Labyrinth encourages calm in an inner-city environment. Made of recycled material, the monochrome structure invites the public to sit down or walk through it and “take a moment of gratitude”.

Not a physical installation but an augmented reality simulation, Non-Pavilion is based on the idea of the Swiss baugespanne, or ‘ghost buildings’. These temporary constructions are erected in the place of proposed buildings to give the public of an idea of their impact. The three studios working on Non-Pavilion add a virtual twist to this concept.

Users can direct their phones at a set-up of poles, rods and wires (at the V&A’s Sackler courtyard) and see virtual installations on their phones. The intention is to create a “ghostly reminder of our urgent need to produce less” which the studios hope ask pertinent questions like: “Can design facilitate a change in mindsets away from consumerism and the mantra of economic growth?” 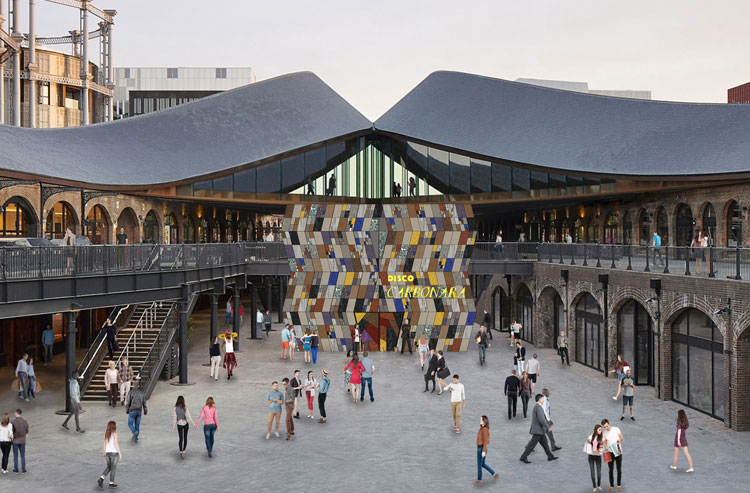 In Coal Crops Yard, Martino Gamper is playing with ideas of appearance and deception by creating a disco façade. Visitors approach the installation, made from colourful recycled material, and walk through a tunnel where disco music is playing, only to learn that there is nothing behind it. Gamper told Design Week that the installation plays with ideas of nostalgia and is inspired by the clubs he used to visit in the area. The conceptual piece will have a “low environmental impact” as the material are either from waste products or will be repurposed later.

The Italian designer is busy this year. There is an exhibition of his interior work, Idiosincratico, also at Coal Drops Yard and he has also released an update of his Arnold Circus stool for the festival.

Designers and artists unite behind auction to fight arms trade