The Peezy was invented by Dr Vincent Forte in reponse to problems in collecting mid-stream urine samples from female patients.

It was developed by a team – Forte Medical – led by Vincent’s sister Giovanna, and in 2009 won the top Best of Show honour in the 2009 Design Week Awards. It saw off projects including Microsoft’s Interactive Canvas and the Apple Mac Book Air.

All very rewarding, but as Giovanna Forte says, ‘We were, in hindsight, at the beginning of quite an epic journey’.

The Peezy had, at this stage, launched to a number of NHS trusts and private hospital group HCA Healthcare, which was its first major customer.

The aim of the Peezy is to deliver midstream urine samples, to avoid risk of infection and contamination of samples, and ultimately to provide more accurate treatment. Forte says it introduces ‘hygiene, dignity and accuracy to urine-based diagnostics’. The first iteration of the Peezy comprised three parts: a U-duct, a sheet and a compressed sponge placed in the narrow point of the funnel.

It was only after this version of the product launched to market that the flaws in it became apparent – and only because of user feedback that new opportunities presented themselves.

This testing process was similar to launching a website in beta, and allowed the Peezy team to tweak the design to develop the version which is being launched next month.

Forte says, ‘Within the NHS I was allowed to attend clinics where evaluations were taking place, and speak directly to the patients; this allowed me to find out what they thought of everything from instructions for use to the collection system itself.

‘All the information was fed back into our design engineers, who proposed an improved product made more simply at a lower price.’

This period of testing resulted in a number of design changes, such as the creation of a flatter, rounder handle to make the Peezy easier to hold.

Another major issue identified with the first version of the Peezy was that it used 30ml Universal Containers to collect the urine, rather than the 10ml tubes that are used in most automated lab analysers, resulting in decanting of urine at the lab. This, Forte says, was ‘inefficient, unhygienic, wasteful and yet another opportunity for specimen contamination. Peezy Mark III addresses this too.’

But the ‘really unexpected factor’ says Forte, was the discovery that men were routinely using the Peezy.

She says, ‘We didn’t have appropriate instructions and we knew that there was a small chance that because of the different angle when in male use, it may sometimes not collect enough urine. But the response to Peezy of the men in these evaluations proved that they liked and needed it, so we got everything ironed out for Peezy Mark III.’

The updated Peezy – which was developed with manufacturer Boddingtons – is a one-piece product that can accept two different containers: the 30ml Universal Containers and the 10ml tubes used in automated analysers.

A series of internal adjustments means it will never empty out if tipped the wrong way, and an external displacement tube means it can’t overfill.

Another important update was the instructions, which have been redesigned by Leeds-based consultancy Luto. Forte says, ‘Because Peezy was so familiar to us, our instructions were not as clear as they could have been and direct contact with patients made this abundantly clear.’

She adds, ‘Healthcare instructions have to tick so many boxes; clarity and detail with expression and a lightness of touch, while meeting specific quality standards.’ 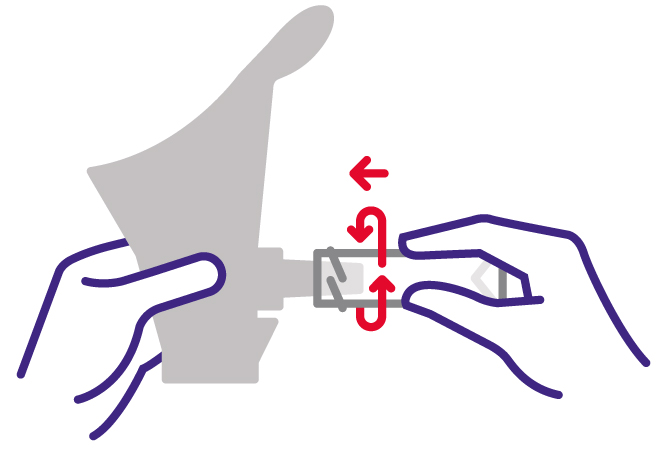 Peezy now sells to customers all around the world, and Forte Medical has plans to introduce the Peezy Stool collector (which at one stage was known, naturally, as the Poozy) and expand the range into the Specimen Collection – a range of products that focuses on specimen samples.

The Peezy has come a long way since its award win. As Forte says ‘Receiving the DW Award gave us the confidence to persevere through quite difficult times, because we knew our work had been assessed by people who understand design and function.’

Shazam emphasises the visual in redesign