‘Years ago, the CMO of a brand new FMCG client (that we were very grateful to have) asked me, in passing, what I thought of a redesign of one of his core brands. I thought a lot of things, and with feeling and reason, but I didn’t want to rock the boat. Instead of saying what I thought, I gave a very diplomatic answer, not saying what was in my head. Not only did I regret it, the client knew I wasn’t speaking the truth. His feedback was ”if it’s not feeling right, pick up the phone and say what you think. It’s what I value”. I learned an important lesson. As designers, it is easy to eschew the stereotype of a volatile, overly-opinionated and difficult-to-deal-with-creative persona, but the opposite is just as troublesome. Be amiable, be reasonable, but understand that there is inherent value as a designer in giving your real opinion – whether it is uncomfortable or not.’

‘“Start again”! We were working on an identity project (no naming names here), and presented the concepts to them – we thought it was pretty good work. Normally we get it pretty spot on first time around, but this time we had not really produced something that really grabbed you. We had played it a bit safe, so when they asked to go away and be bolder it did us a favour and we came back and gave them something better. Luckily this has only happened a couple of times.’

‘I try to be as collaborative as possible with my clients to avoid challenging feedback. I think we tend to underestimate their input and creativity. Having said that, I like to be challenged, so if a client is being too agreeing, it also sends alarm-bells off. Most useful piece of feedback? Tricky tricky. I quite like this comment on a identity job I am currently working on: “Loving the slight connection (for old rockers only) to John Henry Bonham’s symbolism.” Completely unrelated, and not particularly useful, yet a creative piece of feedback I never saw coming. m/.’

‘Many clients become friends as well as business associates. This is always really rewarding as it gives you the opportunity to have a totally honest discussion about a myriad of topics. There are two particular clients who have influenced me with their feedback during discussions such as these, usually over a good dinner. One convinced me that it was time to run my own business again and the other gave me the wise words of “always employ people who are better than you are”.’

‘YO! Sushi invited us in to pitch some marketing ideas focussed on re-energising their brand. We pitched a concept for a video they could use on their Youtube channel as a way to increase social media activity and have some fun. They were really interested – it was a bit of a wild idea, and they were ready to do something unexpected and creative to stir things up. But the piece of feedback that changed everything about the campaign was the question “Could this work as a TV ad?” Up until that point, TV wasn’t even an option, and certainly wasn’t part of the brief, but from that point onwards the project took a whole new direction, and helped us focus on a really tight, strong campaign. It’s the kind of risk-friendly, adventurous thinking you want from clients, and it led to one of our favourite pieces of work. The resulting ad can be seen here.’ 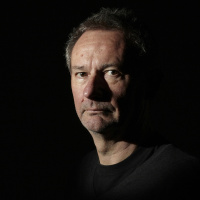 ‘Tom McLaughlan takes photographs in a style he calls ”ministract” because they’re “sometimes minimal, sometimes abstract and sometimes somewhere in between”. Tom asked me to design him a logo. It was a dream job – the kind you only get to do once in a blue moon, if you’re lucky. Tom’s feedback was passionate, spirited, enthusiastic, and idiosyncratic – he wrote a story and posted it on his blog. Design that makes you feel something is what it’s all about for me.’

John Spencer, founder and creative director, Off the Top of My Head

‘We were briefed to create a new retail concept for a leading Swedish retailer. However, what we came up with was a holistic customer experience idea that became the differentiating, organising thought for the business moving forward. It would inform all retail and marketing activity, and the CEO advised, “I believe a great customer experience with a clear objective can be more powerful than any other form of design, marketing and advertising”. This was a special moment where our core belief was captured perfectly!’