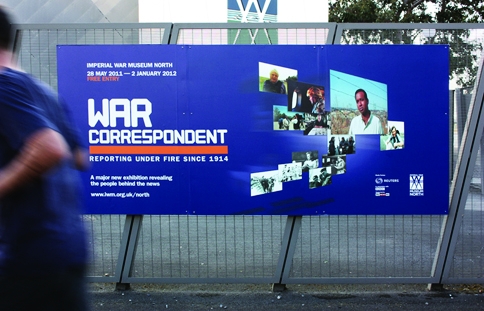 The exhibition, designed by Hemisphere, will be an audio-visual, effects-heavy exploration of the lives of journalists working on the front line.

Wonder was appointed at the beginning of 2010 following a four-way pitch. It was chosen because of its experience in the digital sector, as it was deemed useful because of the exhibition’s footage-heavy content and its audience, says Wonder Associates creative director Rob Fowler.

The consultancy was briefed to create a clean and slick identity that would fit with the image of the exhibition’s partners Reuters and Sky and the feel of the emerging 24-hour news cycle, says Fowler.

The challenge was creating an identity using often raw, low-quality image files, but also a mixture of stills and video footage, Fowler adds.

The main visual uses a grid of 12 correspondent images, communicating the timeline of war reporting from 1914 to the present day.

The consultancy also created a bespoke mono-spaced typeface, named Correspondent, to fit in with the timeline’s grid system.

Fowler says, ‘The images themselves are so emotive and detailed. If we over-designed [the typeface] we’d be taking away from the content.’