‘Looking back at the projects I’ve been involved with over the years, the most unusual media we’ve used seem to always involve making type out of stuff. Type made from ice for Inuit Paper, a dog’s lead for Harrison Pursey, litmus paper for the New York Times Mag, spray paint for Channel4, dice for Shoreditch Trust, heat-bent perspex for University of the Arts London and hand-embroidery for Royal Mail. But my favourite is a recent one I’ve started making for my son Joschka – type made from wooden toy train tracks. It appeals to his childish love of trains and my designerish love of all things modular and system-based – so everybody’s happy.’

‘We did a shoot with John Ross, a brilliant still-life photographer we work with, for a Royal Mail project where we asked him to shoot poppies that had been frozen in liquid nitrogen, then “shattered”. The whole process was really tricky as we had to set up a makeshift studio at a poppy farm, because once the poppies were “picked” they wilted within a few seconds. Working with the liquid nitrogen had it’s challenges as well. Never a dull moment!’

‘For us paper is pretty challenging. It’s such a level playing-field. We regularly design with jelly, chocolate, meat and alcohol creating architectural desserts, whisky tornados and chocolate waterfalls. These mediums have their design limits, but so long as you walk the line of danger between tasteful and tasty the results are compelling. The great thing is there’s little competition. Once you enter the realm of paper, a medium designers have explored for millennia, competition’s savage. It’s excellent to work where the going gets weird.

‘The more unusual mediums I’ve worked with have been for personal interest rather than commercial projects, although I did do a job with balloons and vac formed plastic for a mobile telecoms co that went bust before the balloons did. Things I’ve made, or attempted to make, have included a map of Scotland made of sweets from specific parts of the country, never completed as I kept eating it; a kidney made from tablets and syringes for my brother who kindly donated one to me and a burqa fashioned from my own hair to see if I would get kicked out of France.’ 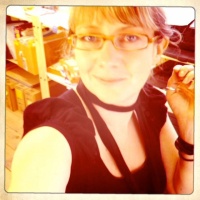 ‘I’ve designed with ice, fireworks, shadows and cooked up what I think typefaces would taste like, but these aren’t so unusual. The most challenging project I’ve worked on in terms of unusual mediums is a self-initiated project that involved me utilising the objects I found around me every day for a year. Materials for my Olympic Logo a Day project included prawns, flags, nails, globes, boxing gloves, pints of beer, bicycles and friends’ heads; literally whatever I could lay my hands on.’

‘Designing with cats and lasers is rather unusual, even for us. People love firing artistic lasers from our cat-shaped sculpture but trying to capture “the most electrifying exhibition” on film can be problematic. Not to mention, lethal to camera sensors. Still, there’s no smoke without fire, unless it’s a smoke machine… then it’s dry ice and you need lots of that to make this Laser Cat show work. Guess the best way to fully understand it is to come and feedlasercat.com.’

How do you name your design business?