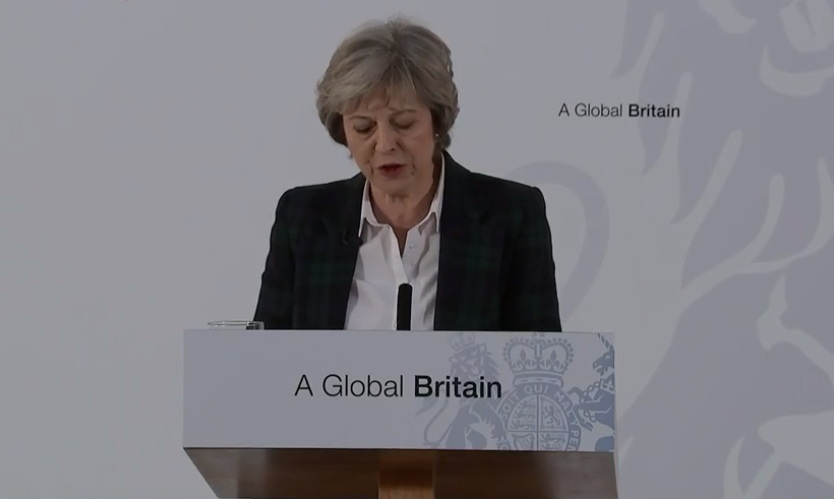 Update 14 March 2017: Parliament has now passed the Brexit bill – the EU Withdrawal Bill – after MPs rejected amendments suggested by the House of Lords, which asked to ensure EU citizens living in the UK would be able to remain. Theresa May is expected to trigger Article 50 and begin the process of leaving the EU in the last week of March.

Update 2 February 2017: MPs have voted overwhelmingly in favour of Theresa May beginning Brexit negotiations, with 498 votes in favour to 114 votes against. May aims to trigger Article 50 of the Lisbon Treaty – and start the UK’s exit from the EU – by 31 March 2017.

UK prime minister Theresa May outlined her plans for carrying out Brexit on 17 January, delivering a determined speech which promises a “global, outward-facing Britain” – but one which will not retain any kind of membership of the European Union.

Following her speech, which detailed how leaving the EU would allow Britain to establish its own laws and trade deals, and free it from making yearly contributions towards the EU, the pound spiked in value to $1.24 – its biggest daily rise since 2008.

Her speech clearly signalled more certainty and less ambiguity around Brexit, and perhaps provides the most positive outlook since the referendum result on 24 June 2016.

But with the autonomy May is promising for Britain, there comes a trade-off – strict rules on exclusion from the EU. This means stronger curbs on immigration, no membership of the free single market, and reduced membership of the customs union, which both currently allow restriction-free trading between EU countries.

While she vowed that the UK would always want “highly-skilled” immigration, she said: “The message from the public during the campaign was clear – Brexit must mean control of immigration coming from Europe.”

She also said that being free from the shackles of the EU would allow Britain to create its own trade agreements with the EU, and with non-EU countries such as China and India.

May promised to use the money that was no longer funding the EU to invest in the UK’s tech and “cutting edge science” sectors, and would ensure that UK workers’ rights were “protected and maintained” once we lose access to EU human rights laws.

She also said “resolving the challenge” of EU nationals currently living in the UK would be a priority – though made no promises about who would or would not be entitled to stay.

But what does all this mean for designers and creative industries? Many global consultancies are reliant on the ability to trade goods, and move people, easily between countries. We look at some of the main issues affecting design businesses.

Currently, the UK design and technology industries garner a lot of talent from abroad, which could be regarded as what May is referring to as “highly-skilled” immigration. Research from the Office for National Statistics (ONS) estimates that the IT sector sponsored 42% of skilled work visa applications to the UK in 2016.

May put a lot of focus on the importance of promoting “cutting edge” science innovation and research, but did not mention the creative sectors. Dr Julie Nugent, CEO at the Design and Technology (D&T) Association warns that the drop in immigration means the Government needs to recognise the “economic value” of design and work harder at encouraging young British students to take on these subjects.

“If the UK is to restrict its borders to migrants with essential skills, the UK will need to grow its own talent in essential design, engineering and technology-based skills,” she says. “Design and technology are critical gateways to careers across the creative, design, digital and advanced manufacturing sectors. The Department for Education must do more to ensure we have the flow of young talent that the UK needs.”

Without the focus on developing these skills, the UK will fall behind other “growing economies”, she adds, such as China, Japan, South Korea and United Arab Emirates (UAE), and we risk not having enough talent to fill crucial industry roles.

While the Government needs to support creativity to enable it to thrive, the onus is also on design businesses themselves to promote diversity following Brexit, says Alasdair Lennox, executive creative director at global retail design consultancy Fitch. “Isolation is not conducive to free-flowing creativity,” he says. “Designers and creatives must work towards establishing foreign workers’ rights without EU law, and advocate for work permits for EU nationals already in the UK, as well as those who want to work here.”

One concern is how an EU worker’s “skills” will be judged if they were to apply to work in the UK following Brexit. John Kampfner, chief executive at the Creative Industries Federation (CIF), is wary of the UK’s “outdated immigration system”, and says that talent is not always equivalent to salary. “The willingness to welcome the ‘brightest and best’ begs the question as to how that will be interpreted in the future,” he says.

Creative exports to the EU are currently huge

While May has promised a “global” Britain that doesn’t focus solely on the EU but also on other important trading giants such as China, research from CIF shows that over 40% of current UK creative service exports go to the EU, and nearly 60% go to Europe including non-EU countries. Kampfner says that in order for the creative industries to “continue to thrive”, the Government will need to consider how to continue with non-tariff trading so as not to impede on imports and exports.

The Design Business Association (DBA) adds that a fifth of its member design consultancies’ fee income comes from overseas clients, with the majority of that coming from Europe – and it’s not just money this provides, but also valuable knowledge. Deborah Dawton, CEO at the DBA, says that British businesses need to keep trading with other countries in order to retain knowledge of “international markets” and stay afloat on the “international business stage”.

Some UK-based consultancies work predominantly in Europe, and fear the loss of opportunities for work. “We get most of our public sector museum work from the Official Journal of the European Union (OJEU),” says Roger Mann, co-founder at exhibition design firm Casson Mann.“At this point we have no idea what will replace the OJEU, and how limiting that will be for us.”

May has ambiguously suggested that, while we will no longer be a “member” of the single market – which allows tariff-free trading between EU member states – we will still retain “access” to it through a new free trade agreement.

In theory, this would give the UK the best of both worlds. We would no longer pay large sums of money towards the EU budget – which totals at roughly £12.9 bn a year – but would continue to trade freely with the EU. But what would the EU have to gain from this?

The EU needs us, says May – it is in “Britain’s interests, Europe’s interests and the interest of the wider world” to continue trading with us, and the UK accepting a “bad deal” would cause “calamitous self-harm for the countries of Europe”.

But she neglected to mention the digital single market (DSM), which allows fair access to online goods and services across the EU and is also subject to European copyright and intellectual property (IP) laws.

George Dibb, head of manufacturing, design and innovation at Policy Connect, says that access to the DSM is essential for the “health and future growth” of the UK’s tech and design sectors, and hopes that parts of the DSM can be included in forthcoming trade agreements with the EU, which is currently the case with non-EU country Switzerland.

He adds that if Britain is excluded from the DSM, and has no access to advancements in EU copyright, IP and data laws applying to digital services, this could have “potentially devastating effects on the future health of the UK design economy”.

No more funding to the EU – so no more EU culture programmes?

May has promised that, although the UK will no longer be handing over millions to the EU every week, we will still have the option to opt in to certain funding programmes if we wish.

Ultimately, May’s focus on science innovation and lack of reference to the creative industries does not inspire hope that the UK Government will be willing to opt into all of the EU cultural funds that the UK currently benefits from. This includes grants from organisations such as Creative Europe.

Perhaps then, as stated by many design industry experts, the Government needs to realign its focus to also include the creative industries, which brings roughly £72 bn to the UK economy, and employs over 1.5 million people, according to research from the Design Council.

Kampfner at CIF says that the organisation would “welcome a discussion” in continuing to participate in European research and cultural programmes which have brought “major benefit” to the UK.