London-based design studio Moving Brands is best known for its work bringing things to life through movement. From BBC iPlayer Kids’ fuzzy, monster avatars and playful logo, through to an interactive website for a collaborative project between Google Play and Sonos, the studio specialises in transforming visual identities through animation.

One of the key brains behind the studio’s operation is creative director, Sean Murphy. Speaking at this year’s Offset design conference in Dublin, he gave an entertaining and candid account of how he got to his role, along with his gripes with the design industry today.

Skier to camera-man to designer

Murphy’s childhood dream was not to become a designer – instead, at the age of five, he was dead set on becoming a professional skier until a broken leg at the age of 11 caused him to have a drastic change of heart, taking the random shift to wanting to become a TV camera-man instead.

It was an unlikely source that caused him to move towards design as a teenager. Rather than looking to the industry greats for inspiration, such as Charles and Ray Eames, Margaret Calvert, Paul Rand or Alan Kitching, it was a character in TV soap EastEnders who managed to convince Murphy.

“Colin Russell was Albert Square’s graphic designer, and I remember he designed a Christmas card for the Square one year on an Amstrad CPC 464,” he says. “From then on, that’s all I wanted to be.”

“It’s much safer to not have a plan”

Murphy, who has been creative director at Moving Brands since 2015, then embarked on an up-and-down path to reach his role today. Growing up in Manchester, he moved to London after school to study a graphic design degree at Central Saint Martins (CSM), and afterwards applied for a masters at the Royal College of Art (RCA) but did not get in.

“It’s much safer to not have a plan, because having a plan sets you up for failure,” Murphy says. “After I didn’t get into the RCA, I was left feeling high and dry. Of course, not having a plan is different to not being prepared – you should always be prepared.”

He had a tough year, filled by a short internship, and a period going on benefits to get by financially. Eventually, he landed himself a longer internship at design consultancy North, and finally managed to get onto a two-year masters course at the RCA in graphic design.

At the same time, he landed a full-time job as a designer at North, where he stayed for four years before deciding to go solo and set up his own design business called Value and Service with a friend from university, Hazel Rattigan.

After eight years’ worth of projects – including one, ill-fated project the pair worked on for record company Polydor, which convinced them to hand-paint 1,000 record sleeves for £600 each, living on over 10 years later through “remnants of repetitive strain injury” in Murphy’s wrist – the pair parted when Rattigan went on to start a family.

“We keep our old studio website as a memorial” 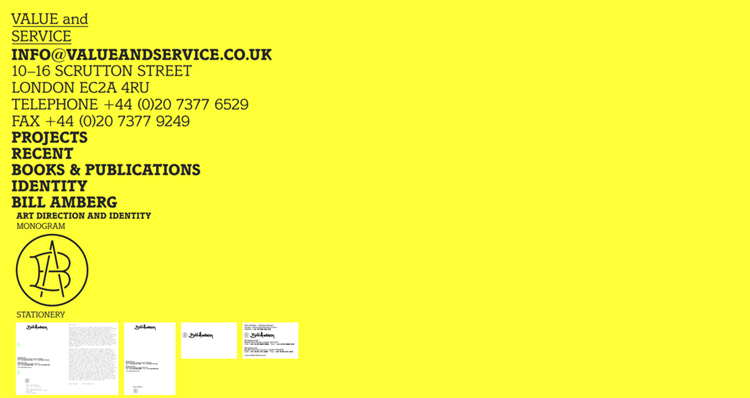 Murphy carried the business on for a little while, but it was not the same, he says. “Once the partnership was gone, I was left feeling bereft,” he says. “I was depressed. I didn’t want to go to work, and that’s pretty fucked up when it’s your own thing – running your own studio is meant to be the pinnacle of self-fulfilment. So something had to change.”

So, he shut up shop in 2011 but the Value and Service website still lives on today, seven years later. “We keep it as a sort of memorial,” he says. Based on the dodgy, irregular sizing of images on the projects page, he adds: “I think it was probably the first responsible website ever designed – don’t send me emails about the terrible user experience (UX), because I won’t read them.”

Murphy moved to what many graphic designers perceive to be the dark side, and worked in advertising. He worked as an art director and designer at Wieden+Kennedy for a year, then decided to “try something else” – he moved into fashion, working for a company called Mariotestino+, creating all sorts of high-end print publications including several Vogue magazine front covers.

Trying his hand at different disciplines, he then transitioned into branding, working at DesignStudio as a creative director, but was made redundant in under a year. He then had a stint as a freelancer, working with the likes of Pentagram partners Marina Willer and Domenic Lippa, and finally wound up at Moving Brands as creative director in 2015.

He says that, along the way, one of the hardest things has been accepting that increased seniority means doing less of what you love – designing – and more of what you know nothing about – managing.

“The downside to trying something new is that you constantly feel like an amateur,” he says. “I felt pretty expert at being a designer, but that expertise is slowly being eroded and becoming something else. I’ve had to learn a lot on the job and wing it a lot, which is really stressful. The more senior you get, the more people expect you to have all the answers and know everything – which you don’t.”

There are plus-sides to constantly being the newbie, though, he says: “Being an outsider gives you perspective and objectivity. It also means you can ask dumb questions that everyone else secretly wants to ask.”

He adds that one of the biggest skills he has had to learn is the art of letting go. As most designers will have experienced, he has witnessed much of his hard work get trashed only to have to return to the drawing board afterwards.

“85% of everything we do as designers doesn’t make it – it gets thrown out, edited out, or just doesn’t materialise at all,” he says. “I’d actually like to see a Museum of the Canned Idea.”

“I have a healthy distaste for buzzwords”

And while he enjoys his job as a graphic designer, he says that the industry can lack individuality, and he tires of the forced precision and corporate mundanity that comes alongside branding – from jargon and buzzwords, to the scrutiny of “imperfect” logos on social media.

“The language of the ‘big agency’ was alien to me, and it made me want to reject it,” he says. “Phrases like ‘push back’, ‘review’ and ‘challenge’ – that just means ‘say no’, ‘look at some work’ and ‘problem’.”

“Words can be a powerful tool for a designer, but I have a healthy distaste for buzzwords and jargon,” he adds. “The same ones rear their ugly heads time and time again, like ‘iconic’, ‘passionate’ and ‘empowering’. I think words should just be retired when they’ve lost their value or meaning.”

As a result, he recently completed a branding project for an organisation called the World Association of Girl Guides and Girl Scouts (WAGGGS) – and despite its uplifting and positive tone, refused to use the word “empowering” anywhere in the branding, which he says is clichéd and has lost all meaning.

“Why do people care so much about new logos?”

He adds that there is an obsession in graphic design for perfection, when in reality, imperfection can be more endearing and stand out from a sea of sameness.

The need to scrutinise every tiny detail of a new logo – particularly one designed for a big brand – is no new thing. We have seen it happen in recent years with everything from Wieden+Kennedy’s Formula 1 rebrand through to North’s new identity for the Science Museum, and DesignStudio’s makeover for takeaway app Deliveroo.

Murphy experienced this first-hand, when a Vogue magazine cover he designed was ripped apart by online commentators, and he grew even more cynical of this behaviour – but even worse than verbal abuse, is the need for people to use social media as a platform to mock-up “correction” images, he says.

“I actually prefer people to spew vitriol than make [pointless], small edits,” he says, in an amused-but-exasperated tone. “People love fixing perceived imperfections. I find these mass histrionics, like towards past Olympic logos, so futile. Why do people care so much? I don’t even care that much, and I do it for a living!”

Robots and screen-free future for design

And despite his long, and in some places difficult, career journey, Murphy has made a name for himself in the graphic design world, from Vogue and the BBC to smaller cultural institutions and record labels.

Stints of unemployment, redundancy and repetitive strain injury have not left him wary of the future, as he says he looks forward to embracing screen-free technology, robots and voice-activated and connected home products in his work. Given his humorously cynical outlook and need to combat “perfect” design, it’s also plausible that Colin from EastEnders is still his role model.