While lockdown has made the possibility of design shows all but impossible, Descignscape is a virtual even which aims to “reunite, rethink and rewrite design” over a three-day programme. It’s being organised by the team behind annual tradeshow Decorex and LDF’s designjunction and will look to the future of design across retail, residential and hospitality. (You can read what retail designers think about the future of socially-distanced shopping here.) Those are three sectors that have suffered greatly during the pandemic, with design solutions coming thick and fast. The virtual programme will explore design solutions, showcasing products as well as connecting creatives working in relevant fields. Designscape takes place 11-13 August 2020, and more details are available on its website.

Exhibition: Electronic: From Kraftwerk to the Chemical Brothers, at the Design Museum

Major institutions – from the V&A to the Science Museum – are having phased reopenings this summer, and details are available here about exact dates and what’s on offer. While many will be taking the opportunity to visit exhibitions that were only open just before lockdown, the Design Museum is welcoming visitors to a brand new blockbuster exhibition (with socially-distanced measures in place). Electronic: From Kraftwerk to The Chemical Brothers takes visitors on a history of electronic music and its impact on design, fashion and art. Featuring exhibition design from All Things Studio, the display has kaleidoscopic lighting installation, smoke machines and strobe lighting which put visitors in the right state of mind to explore club culture. You can read our first-look preview here.The museum is also hosting Fountains of Hygiene, the results of a competition run by Bompas & Parr, which sought to find innovation in hand sanitiser design. 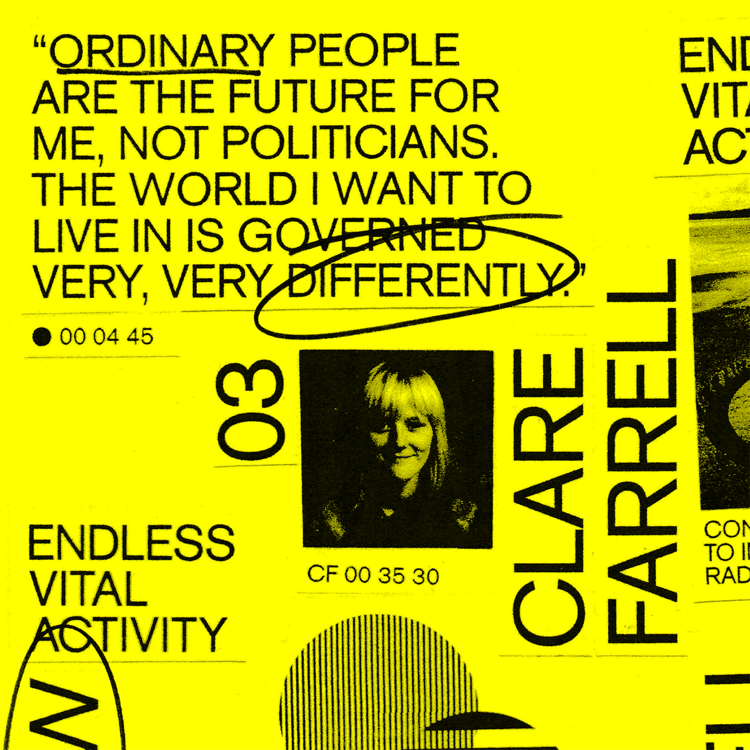 London-based design studio Accept & Proceed – which recently designed an Orwell-inspired identity for data rights agency AWO – has launched a podcast, which explores the ways in which brands and creative businesses are rethinking their impact on society. It’s hosted by the studio’s founder and creative director David Johnston. The first three episodes are already available, where Johnston is joined by guests such as Extinction Rebellion co-founder Clare Farrell. Upcoming episodes will feature founder of materials research design studio Ma-tt-er Seetal Solanki and in another climate change-focused episode, the director of climate documentary 2040 Damon Gameau. Described as a platform to “elevate the voices of the radicals and visionaries”, Johnston wants the creative community to help “tackle the problems of tomorrow, today”. It’s available on all major streaming platforms, and new episodes will be released 13 August. 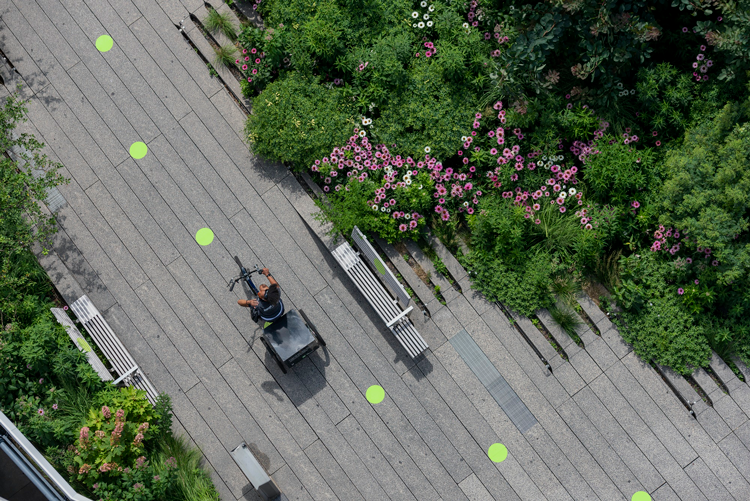 One of the more positive outcomes of lockdown has been a newfound appreciation for public spaces, including parks and any place of respite in urban areas. As lockdown rules have eased, these will undoubtedly become more popular, and designers have contributed to social distancing efforts to ensure a safe return. Pentagram’s Paula Scher has created a brightly-hued wayfinding system for the Highline, a 1.45 mile elevated walkway on Manhattan’s west side. Scher created the signage system for the narrow tree-lined walkway when it opened in 2009, so it is fitting that she has designed the system for its reopening. There are over 1,000 bright green dots which help visitors move at a safe social distance through the park, appearing on the floor, in queuing systems as well as furniture along the way.

While Scher’s system has launched, many social distancing ideas are still in the concept stage. Where We Stand, launched by David Michon and Nicholas Bell, tasked 15 studios to come up with innovative concepts, and these ranged from large-scale graphics for east London’s Hackney Marshes while dn&co suggested an AR app for use in Parliament Square.

Virtual zine: Onomatopoeia, from Coda to Coda and Rosie Lee

Part visual magazine, part “audio-visual game”, Onomatopoeia is a new online space where designers come together for a thirty-second collaboration. Devised by Coda to Coda and Rosie Lee, it’s a mix of visual and sound design, often with fantastical aesthetic results which may provide some much-needed escapism during these lockdowned summer months. Unsurprisingly given current conditions, many of the contributors have been inspired by local environments, finding inspiration from the rubbish that accumulates outside their flats to a field of cabbages in Kent. Given its online nature, Onomatopoeia is a chance for animation designers to show off their work, such as Patrick Savile who explores the relationship between organic and digital shapes via frame animation. It’s published quaterly, and when a new issue is released, two collaborations will be made available online every week.