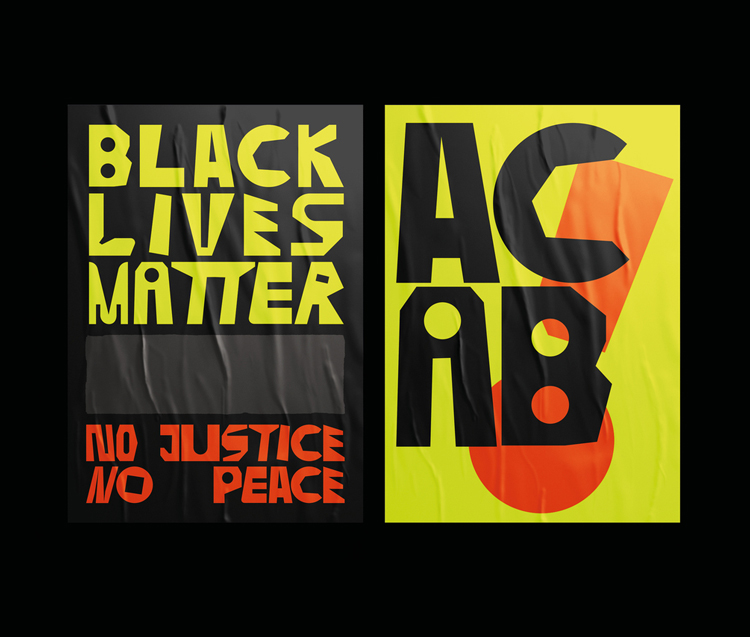 In the wake of George Floyd’s murder – and the subsequent protests – the design world has reacted with reflection and action for moving forwards. In the more immediate future, designers have found ways to support networks that are central to the movement. At the start of the year Pentagram partner Matt Willey announced that he would be giving all his typefaces to the Buy Fonts Save Lives initiative. While that project is taking longer than expected to establish, the typefaces – including Blakey and Atype Stencil – can be purchased, and all proceeds will go towards the Bail Project, a non-profit that aims to support people who cannot afford bail, and their families.

Early in June Plymouth-based illustrator Sam Rowe also created protest signs (free to download and print). That was followed by Revolt (shown above), billed as an “angry font for angry people”. You can pay as much money as you’d like for the typeface, and all proceeds will be split between British charities, UKBLM and The National Bail Fund. 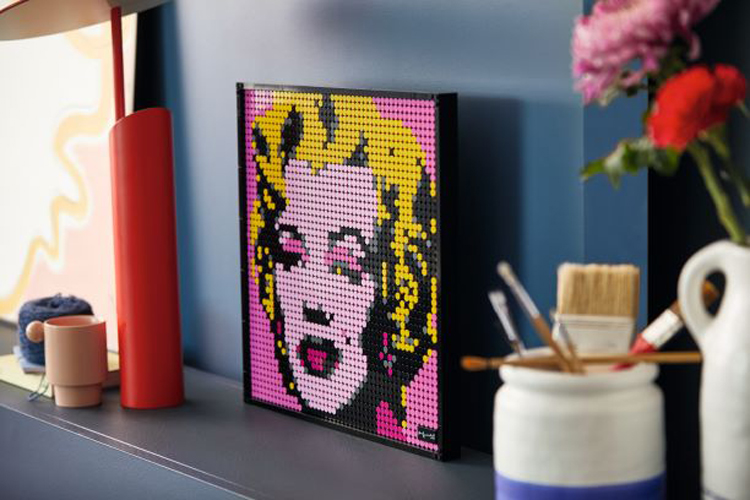 LEGO’s new range is designed not for children but adults who are seeking a “new creative experience”, which might be relevant to many as we edge towards the (possible) end of lockdown. The four sets tend to a variety of pop-culture tastes, and include Andy Warhol’s Marilyn Monroe, The Beatles, Iron Man and The Sith from Star Wars. Each set also comes with a bespoke soundtrack that provides a “building companion” as you create the image out of the blocks. It’s the perfect way  to destress, the toy company says. And once they’re made, they can be hung on walls just like a “true work of art”.

Love, Hope and Joy, from Anthony Burrill and Better Days, from Yinka Ilori 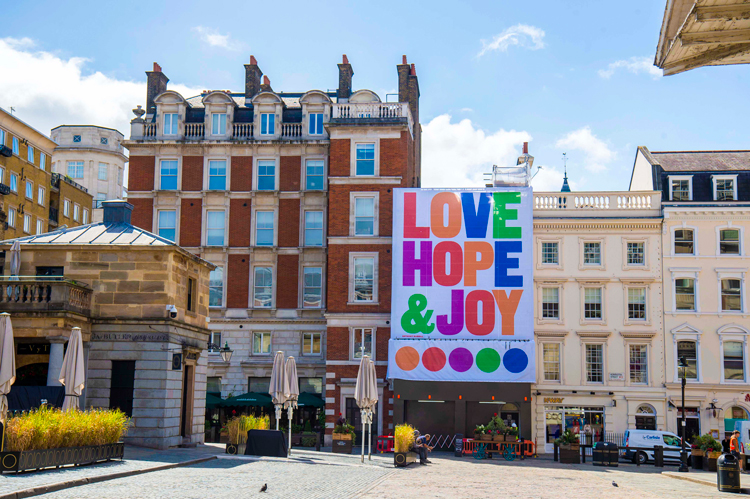 London has not been short of graphic design that has aimed to provide comfort during the lockdown (like these virtual billboards from UK design studios). Anthony Burrill and Yinka Ilori join these ranks with two separate projects in June. Ilori’s typically colourful designs adorned a street side in Southwark in support of CW+, the charity of the Chelsea and Westminster NHS Foundation Trust. Better Days are Coming, I Promise brings Ilori’s Nigerian heritage to London as part of a wider project for temporary and public art installations in the capital. Revealed towards the end of June was Anthony Burrill’s contribution to Covent Garden – a poster which covered four floors of a building in the market square with a message of hope. It’s being billed as a “huge love letter to London, the UK and the world” and 100 copies of it will be sold. All proceeds will go to NHS Charities. 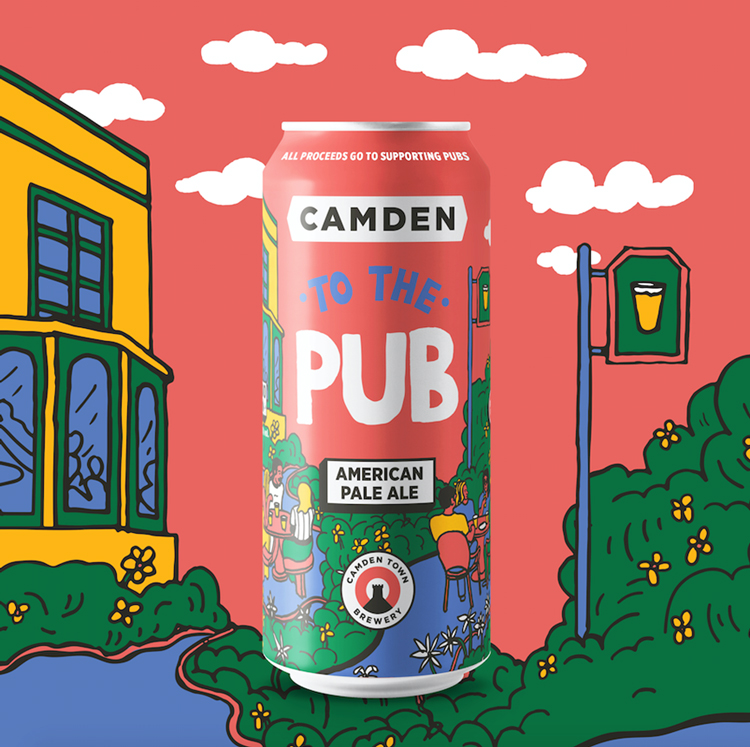 July may mark the re-opening of the hospitality industry, but the path ahead does not seem clear – given social distancing and fears of a second wave. In an attempt to ease the effects of months of lockdown, Camden Town Brewery has launched a special edition pale ale. 260,000 pints of the drink will be sent to the industry for free, to maximise cash intake. It will be available at all participating pubs come July (though you can buy it online at Camden’s website). London-based illustrator Gaurab Thakali has designed the packaging for the drink, featuring beer-drinkers sitting al fresco on a summer’s day – a wistful visual reminder of a pre-COVID summer.

Super You AR app, from Universal Everything 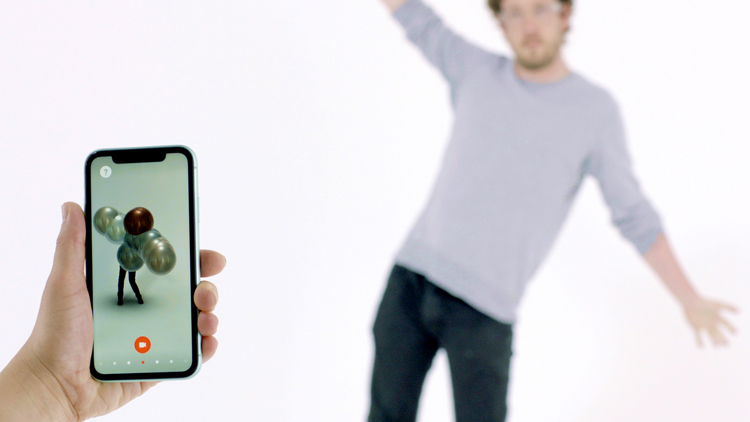 This AR app lets you “experiment with the human form”. If you have never thought about doing this before, the time of social distancing might be a good start as the app requires no touching. You simply aim the camera at a friend and swipe through 11 AR costumes. It lets you film participants to create mini movies – transforming daily walks or impromptu kitchen dances. Universal Everything creative director Matt Pyke says that it “combines our fascination for mixing timeless figurative representation with emerging technologies to create new forms of soulful digital expressions”. These “soulful” expressions so far include reflective spherical shapes and iterating outfits, though the studio plans to create more disguises to transform your friends.

Where are the Black Designers?

Launched in June, this initiative seeks to provide a platform for Black designers and creatives through showcasing work and creating support. The first virtual conference was held 27 June, and over 10,000 people attended. While it is still in its early stages, the network plans to provide “educational collaborations, portfolio reviewers with major tech companies, and more opportunities to showcase Black designers”. So far, that’s largely being done through its social media channels, and in particular its Instagram where it has reached over 30,000 followers. Earlier in the month, Design Week spoke to graphic designer Greg Bunbury who started a billboard project in London to engage with Black British designers. #BlackOutdoorArt started with Bunbury’s own I can’t breathe poster, and is rolling out across more unused billboard spaces.

Together, by Milton Glaser

Please check out the link in our bio for Milton’s last interview From Ignacio: “This is the last design I had the privilege to work on with Milton. He told me he wanted to create something to enhance the sense of community during the covid19 crisis. It was his belief than a designer has a responsibility towards society to make it better. For everyone.”

Milton Glaser, the graphic designer behind  I ♥ NY and Bob Dylan’s most famous image, died this month. (His friends and colleagues paid their tributes to Design Week here). His final project was published on his studio’s Instagram this week – a typographic image that simply reads ‘Together’, in a multi-coloured striped pattern. Milton Glaser manager Ignacio Serrano said that Glaser “wanted to create something to enhance the sense of community during the COVID-19 crisis”. “It was his belief that a designer has a responsibility towards society to make it better for everyone,” he added.