Big Motive has designed a contact tracing app called StopCOVID NI, which aims to inhibit the spread of COVID-19 across Northern Ireland.

Contact tracing works by informing people if they have come into contact with someone who has tested positively for the virus. That person is then asked to self-isolate in the hope that the chain of contact is broken. While this can be done over the phone by human contact tracers, the scope for technology to help in this field is great. Singapore pioneered a Bluetooth-based app, TraceTogether, which had been downloaded 800,000 times by the start of April.

The roll-out in the UK has not been smooth, with reports of poor technical performance of an England-based app (trialled on the Isle of Wight) and concerns over privacy. While it was headline news when Apple and Google teamed up to create a “decentralised” system which meant that data did not have to be stored centrally, the NHS-developed app did not incorporate this. Developed by the NHS’ digital arm NHSX, the app has now been abandoned.

Northern Ireland has now successfully launched an app, however, in a process that lasted four weeks. According to Belfast-based Big Motive, the app has been downloaded around 167,000 times (a figure which continues to rise) since it was released on Friday. The population of Northern Ireland is around 1.8m. The studio worked with the Department of Health, software developers NearForm and digital consultancy Expleo on the app.

Designing for a single-use 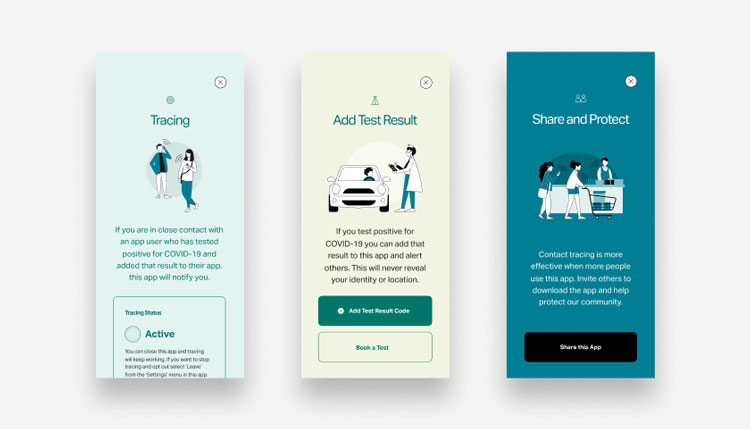 Big Motive has also been involved in a symptom tracking app, which was launched earlier in lockdown and has seen a bump in downloads over the weekend. The two apps have been created as “companions”. Big Motive design director Rebecca Walsh and co-founder Stephen Shaw have headed up the two COVID-related projects. Walsh, with a speciality in service design, was focused more on the symptom tracker, while Shaw was primarily involved in the contact tracing app.

The contact tracing app has a simple purpose: users download the app, input their details, and then let it run in the background. People are then notified if they have come into contact with someone with COVID-19. If they then test postively for the virus, they will get a text message with a code that can be fed into the app to notify the people they have come into contact with. This singularity of use was a key driver, according to Shaw. He asks: “How do we design an experience for people that they use once, enjoy and find successful, but not feel the need to go back in and constantly review it?”

Accessibility and inclusivity was “critical”, Shaw says, as the app will hopefully be used by an “unprecedented” portion of the population. The app not only had to meet the Web content Accessibility Guidelines standards, but also be applied for the “next level”. The studio also worked with the Royal National Institute of Blind People as well as the country’s Commissioner for Children and Young People. This wide-ranging consultation was important for the screen design and also the language that’s been used throughout.

“A simple set of instructions”

On the initial download, there is a tour which is an attempt to create a “simple set of instructions for users”, Walsh says. The illustrations also aim to clarify instructions. These have been done by studio communication designer Sarah Pannasch, and are used across the apps. Versions of the app were group-tested frequently throughout the process.

The incorporation of Northern Ireland’s public-funded healthcare system, Health and Social Care (HSC) in the design was also critical in building trust for users. The HSC logo appears as the cover of the app, and then on subsequent in-app pages. A recognisable teal colour was also incorporated into the design of the app, and this colour palette has been expanded with complementary shades.

The identity of both COVID apps had to be “consistent”, Walsh says, to build confidence in users. It also emphasised the associations with HSC, which is a “trusted government body”. The design of the two apps is inverted, which reinforces the idea that they are part of the “same family” as well.

The design strategy extends to features outside of the app’s interface. The text message which informs people of their health results was originally going to come from StopCOVID NI, but it was deemed “too easy to fake” a message from this name because it contains homoglyphs (symbols that could either be letters or numbers such as I and 0). A more “trustworthy” and “difficult-to-fake” source had to be used, Shaw says. It now comes from HSCresult.

Privacy and data protection remains a contentious issue for contact tracing. This app uses Apple and Google’s “decentralised” model, Exposure Notification API. Because of the confusion and misinformation surrounding these issues, the studio said it was key to “explain privacy” in the clearest ways possible. The app is clear in the set-up stages about what data is stored: the number of app users, the number of people who enter their HSCresult code and the number of people in Northern Ireland that have been exposed to COVID-19. 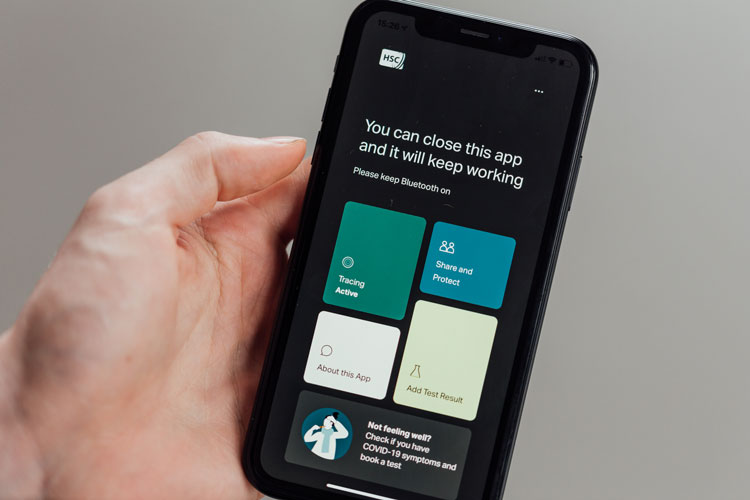 The notification feature – which tells users they have come into contact with someone with COVID-19 – posed a challenge, Shaw says. It comes with an instruction for people to self-isolate for 14 days, which made people think that the app was broken, he says. “They made all kinds of excuses about not wanting to isolate for 14 days,” the designer adds.

The studio had to think hard about how that information was designed. The emphasis shifted onto the people they loved, and an option to speak to someone so they could connect with the manual contact tracing process. Communication and strategy was a big part of the app design. Walsh explains how the studio worked with behavioural scientists who advised on these “small nudges” that were built into the app. For example, throughout the set-up process the app thanks users and tells them they are “doing their bit for the community”, which looks to create an encouraging sign-up process.

“An ability to take control and do something” 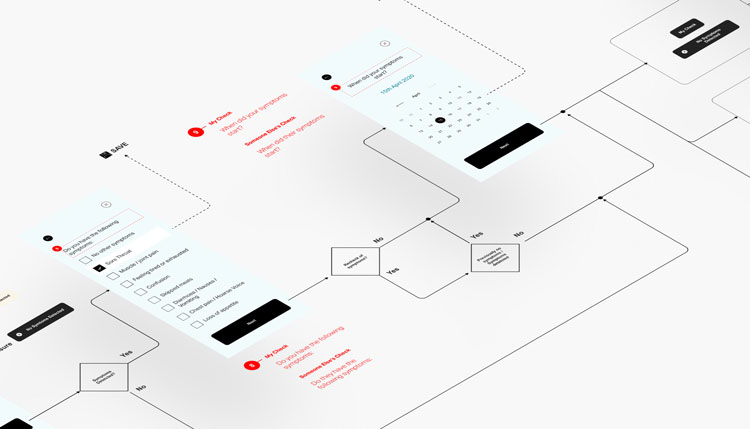 “People wanted an ability to take control and do something,” Shaw says. The app is an attempt to make users “active participants”. The calls-to-action throughout were key in playing up to this desire. Even the name was tested. The focus on individual purpose was a deciding factor in the name, whereas more “passive” suggestions such as COVIDShield were not deemed as effective.

There is also humour in the chosen name. NI is used everywhere in the country, but it also sounds how a Northern Irish person might say ‘now’. That means that the pronunciation of StopCOVID NI was particularly emphatic. People liked this “vernacular” and community-aspect of this aspect of the name – what the studio calls “stickiness”.

When Design Week spoke to UX designers in April about contact tracing apps, Else chief design officer Dave Dunlop suggested that a COVID app could be like a “companion”. He asked: “Can’t it be the thing that helps you through this?”

Big Motive has incorporated these ideas, and hopes to continue to do in later versions of the app. In the sympton checker app, for example, there is a 14-day timer that guides people through the self-isolation period. Each day, the app asks them a “non-accusatory” question about whether they had to go out for an emergency. It’s to encourage interaction with the app, Walsh says, and the information is not stored. However, if users have had to break self-isolation, the app directs them to community support line that could be helpful. It will be exciting, she says, to see how this evolves.