This year’s Consumer Electronics Show (CES) looked different from the previous 53 editions. Held annually in Las Vegas, US, this year’s show – which brought together some 1,900 tech companies – was virtual. It’s estimated that around 150,000 people tuned in online throughout the week.

Perhaps unsurprisingly Covid was the dominant theme this year, whether it was tech solutions for pandemic life (high-tech facemasks) or how to make time at home more enjoyable with the help of a robot that doubles as a waiter. We take a look at some of the biggest trends.

AirPop introduced its smart wearable this year – perhaps the most notable of the masks that debuted in 2021. AirPop Active+ connects to an app that monitors a user’s breathing and tracks the pollutants blocked by the mask. AirPop claims that it blocks 99% of harmful particulates. It follows LG’s wearable air purification device announced last year, and this trend seems to be sticking.

UK company Binatone also unveiled its MaskFone which hopes to solve the problem of muffled phone calls. The mask has built-in noise-cancelling earbuds and a microphone so that you can safely make calls while wearing it. With 12 hours of playtime, the device – which has a five-layer filtration system – also connects to mobile phone assistants for hands-free dialling.

Air purification (which saw renewed interest last year) was another focus for exhibitors. CleanAirZone opts for a sustainable route by using natural microbiotics and enzymes to filter air at home. LuftDuo also eschews filters; the miniature air purifier uses UV LED and photocatalytic technology to clean the air inside cars and other small spaces.

A host of health companies with solutions geared towards the pandemic. Wearable decide BioSticker (from BioIntelliSense) allows for at-home monitoring of vital signs and symptons related to Covid – its developer says that a single device can be used for 30 days without needed a recharge. CarePredict’s Pinpoint used AI to improve contact tracing in senior living facilities such as nursing and care homes.

SenseGlove is a haptic glove that provides professionals with VR training – by allowing them to interact with virtual objects – to prevent physical touch. The company says it’s vital for remote working during lockdown.

Homelife was a big focus at CES 2021. Many more of us are working from the spaces we live – a focus for Google’s home technology last year – and exhibitors presented products to make both those factors more enjoyable and productive.

Some of those were practical offerings. Take LG’s InstaView which lets you see what’s cooking inside an oven with a double tap (there’s also a version for fridges). On the more fantastical end is Samsung’s Bot Hand – a robot that can fill the dishwasher and even pour a bottle of wine. Belgian start-up Nobi presented its smart lamp, which uses AI to detect when someone falls and prompts help. It’s aimed at elderly people who live alone; one in three people over the age of 65 fall at least once a year. 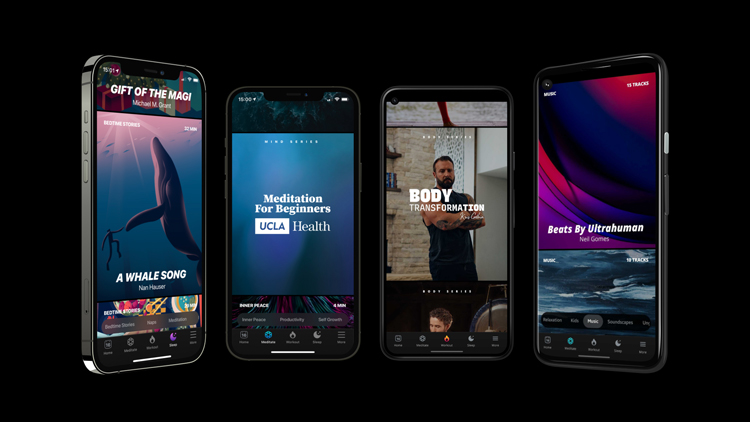 Tech companies also scrambled to meet the demand for at-home gyms this year. Samsung’s Smart Trainer uses a webcam to track your movements via its smart TV. Fitness video platform Ultrahuman also debuted at CES. The app partners celebrity fitness guides with iOS and Android devices to offer “masterclasses” and fitness feedback. Those software-based approaches were accompanied by new gadgets, including Bowflex VeloCore which imitates the experience of outdoor cycling.

Meanwhile Chicago-based Rise Gardens launched a range of products for anyone lucky enough to have outdoor space (or just in-door plants). The WiFi-connected device can partner with Alexa to water outdoor plants and also microgreens using hydroponic technology. The company says it’s had a 750% increase in sales since March 2020.

There were a few headline-grabbing projects from the mobility sector this year, even if none were as large-scale as last year’s Woven City from Toyota. These were mostly concepts: Cadillac’s evTOL (from the newly rebranded General Motors) and Archer Aviation’s flying machine (a partnership with Fiat Chrysler). The latter hopes to one day be able to travel 50 miles at a time at speeds of up to 150 mph.

Sony also debuted its first foray into drone technology with its Airpeak model. It’s an exciting reveal for a company known for its high-quality cameras – the quadcopter product specially designed for video footage, with a built-in Alpha camera. Not much is known about the model just yet but Sony hinted that it’s being used for urban cityscapes.

As working from home looks set to continue, companies revealed products to improve the experience of ever-present Zoom and Microsoft Teams. One such brand is Owl Labs who specialise in digital whiteboard for virtual meetings. It also unveiled Owl Connect, a 360-degree smart video conferencing camera that hopes to create immersive meeting experiences.

Five projects that reflect design in an age of crisis